26 games into the season, the Mets are 16-10, but coming off the back of three straight series defeats. They even forgot to score in the last couple of games.

It’s easy to predict the best when a team flies through a 10 game winning streak. But now I wonder how many Mets fans are predicting the worst. So I’ve got a challenge for you. Come on… predict how many wins they’ll get. You’ve got the comments section below to do it.

Sure, Michael Cuddyer robbing Zimmerman’s home run was great… but what about his lack of range on those couple of doubles? The Dude is hitting lefties and (mostly) righties… but then he chased ugly pitches in the dirt. Wilmer was benched and then Tejada proceeded to do his best Wilmer impersonation by jumping over a dribbler down the middle. Goeddel continues to pitch straight up and down and not side to side. Gee was saved by everyone’s favorite puffy hatted man, Alex Torres, but surely he’ll be traded soon.

Will Dilson Herrera hit? Will Daniel Murphy stop posing after every swing and actually run towards first base straight away? But will Harvey every lose? And will Juan Lagares keep hitting so well? Urgh… Come on, let’s figure this out.

So do it now. Predict the Mets’ win total in the comments section below. You can be a hero in five months time. I’ll arrange a little prize for the winner too (a Keith bobblehead?) and also feel free to berate me if I get my prediction wrong.

Mets’ fans are intrinsically pessimist. It’s a natural progression from watching far more losing seasons than winning seasons. It’s a sort of mental security blanket. In a street fight, Mets’ fans would always win because we’ve been through the rough times. And then rougher times.

Long time readers of MetsToday will remember the commenter going by the handle “Izzy.” He was someone who fascinated me. Izzy relentlessly complained about his favorite baseball club. The comments were always negative and terribly phrased.

“Gee, if there wasn’t one guy defending a guy from a different background, it would be very hard to believe there are not some serious problems within the org. But to those who believe in Met perfection, ok, enjoy. I do’t know what happened but since this is the Mets where the org and the number 1 Latino have major problems ending with a career ending injury, where Domonicam SS Nd star player Reyes was let gonwithoutba fight followed by goody two shoe White Wright being made a Metsieblittle God, it is easy to see the real possibility of tensions in the ever Whitening Metsie world.”

Everything Izzy typed seemed to have genuine anger. Steam must have coming out of his ears as he pounded the keyboard. He hated Terry Collins and wasn’t fond of a bunch of Mets players. And he really hated Omar.

Who was this man? Was he searching for love or acceptance? Or was Izzy – like so many who comment on the internet – simply a normal guy who uses the anonymity of the web to release their inner negativity? Izzy had a mean streak – I can’t even quote some of his lines – and his complaints were undeniably masochist.

But that’s not atypical for a sports fan. I equate the love for sports’ teams with parents’ extreme love for their children. Their (usually troll-like) baby is the most wonderful thing in the world. But their (usually not-too-bad) rebellious teenager is Satan incarnate. It’s love or hate bundled up with the need to control.

The New York Mets were Izzy’s teenage son. He desperately kept telling them what to do, but they kept doing something else. He never doubted his wisdom… he had been there and he had seen it all. I joked once that he’d travelled back from the future in a Delorean car, such was the intensity of his predictions.

Since I am a half-glass full of alcohol kind of guy, I wanted to challenge Izzy to a prediction battle but he whizzed off in his Delorean into the mid-80s and is winning millions using his 1950-2000 Sports Almanac.

My own prediction comes at a cost. Each year I bet £10 of my hard earned teacher money on how many games the Mets will win. I get a little bit of a spread (3 games) and I have one tactic. Before the first game of the season, I bet the Mets will win 4 more games than the majority of Mets’ fans think they will. It’s worked more than it hasn’t.

I’m not advocating gambling but I gamble once in a year in legal way and continue to ruin my Hall of Fame eligibility.

And I’ve just found the perfect prize if you beat me. Izzy would love it. I shudder to think what he would do with this smiling face of the Mets once it’s attached to his hand. 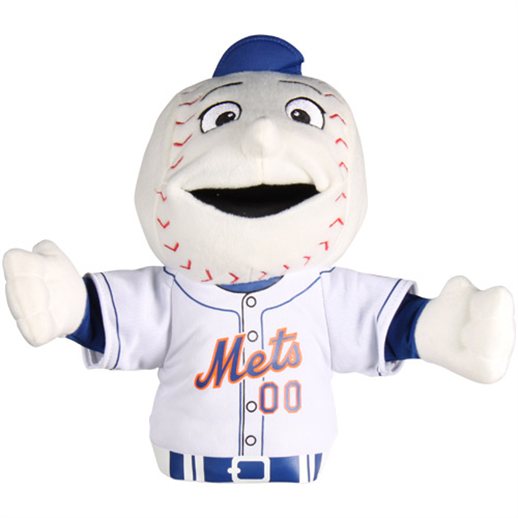 Back The Mets Won’t Trade Bartolo Colon, But Should They?
Next Why the Mets Promoted Johnny Monell