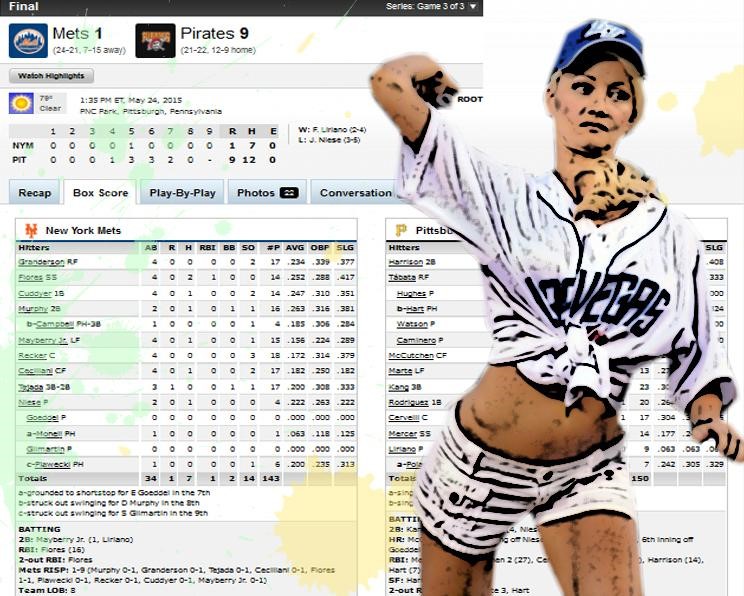 Well, at least it was a nice change to watch the Las Vegas 51s lose instead of the Mets.

The 51s featured four rehabbing Metsies in the first four slots in the lineup. Curtis Granderson continues to mistake strikeouts for walks, Wilmer Flores is battling to recover from his chewing gum addiction, Michael Cuddyer had some horrible tar wounds on his cheeks, and Daniel Murphy was suffering from facial injuries because he smirks every time he jogs out a scratchy single.

The announced pitcher was major leaguer Jon Niese, but I believe this was some sort of Niese clone. He was throwing 86-88mph cutters and slouching around. The 51s’ third baseman was a man-mountain called Ruben Tejada. You always try and get in some power at the corners, and he had a .4000 slugging percentage in his last at-bat before this game.

Games like this are horrible to watch and horrible to write about. So I’ll try to focus on nice stuff, instead of the Pirates’ five infield hits and the 14 Mets strikeouts and the four goofed-up plays and the fact the Mets made Francisco Liriano look good.

The Pirates are a better team than their record. They really are. And the Mets are better than this. Yes, they really are. This storm of injuries and facing better teams (the Cubs, the Cards, the Pirates) will end once they face the AA Phillies. Don’t forget the Phillies, Braves and (to an increasing extent) the Marlins are why many of us predicted the Mets would get 86 wins or so. If you think the Mets have been bad recently – and they have – you’ll cheer up when they beat up on those little league teams.

Andrew McCutchen embodied why I think the Pirates are a very good team. He’s had a lousy start by his own high standards, but no-one can be that talented and not turn it around. He’s starting to. McCutchen is all timing and legs. He sits down into each at-bat on those massive thighs, and when he connected – seemingly lazily – on his home run in the fifth, the ball soared out to left center for a two run shot. He’s zoning in and if he isn’t up there in the MVP voting I’ll eat my 51s’ cap.

Eric Goeddel intentionally walked McCutchen before Starling Marte launched the next pitch for a home run of his own. Each time I write about the Mets I seem to criticise Goeddel or Daniel Murphy. It’s probably just a fluke of timing, but I still don’t rate Goeddel’s pitches. This was another loopy “hit me” pitch.

I could be wrong. Goeddel’s ERA is still just 2.60 and the Mets’ pen had a 1.53 ERA in May before this game. It’s hard to argue with the statistics but I just don’t have confidence in Goeddel or much of the pen. Following the experience of ambidextrous pitcher Pat Venditte, I think it’s time for Jeurys Familia to learn to pitch with his left hand. Familia can then pitch in 120 games this year.

Despite Sean Gilmartin giving up a couple of runs, I like his stuff more. He threw (another!) loopy curve too that gave up a RBI but his pitches usually have a little more bite.

The SNY team did a great job of preventing us from breaking into tears. They remain the best. We had images of exciting cheese and beef sandwiches, as well as Gary hopefully saying: “You have to think they’ll do something before this turns into a freefall.” As ever, thank-you Gary and Keith.

The one I hope isn’t in freefall is Wilmer Flores. He made a couple of nice plays – the grab and throw in the 8th was impressive – and the kid can hit enough to be worthy of a 6-8 spot in a good lineup. But he failed to get the lead runner in the fifth, and he failed a couple of other times too. The constant gum chewing also remains a worry. He’s edgy and over-eager at the plate, hacking at fastballs outside or up.

I hope Uncle Terry is taking care of the kid because – and this is me trying to cheer everyone up – Wilmer could and should be the Mets second baseman for a while.

So, let’s move Wilmer to 2nd, trade Murph for some pizza, and the Las Vegas 51s’ lady can take over shortshop. If you thought Matt Harvey drove up ticket sales, the Mets will have another new strategy to pay off their debts and finally get David Wright some high class back treatment.

Back Jon Niese: I Went Back To Ohio…
Next Why Mets Fan Chris Mullin Threw Out First Pitch at Yankees Game