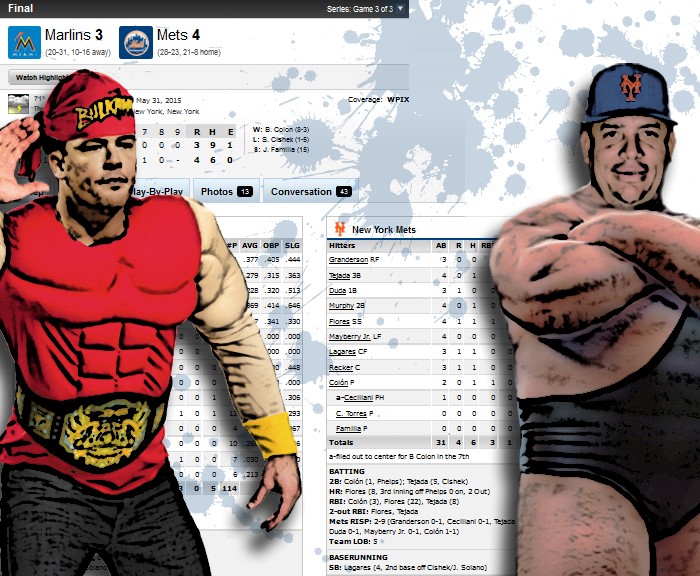 At the start of the season, the Mets and Marlins seemed likely to be duking it out for second spot in the NL East. The Marlins have sunk since then, while the Mets have rode a cut-rate subway fare to a little success. Things will even out, but I’ve still got the Mets just that little higher.

Everyone will talk about this game via Bartolo Colon’s rasping double past Ichiro Suzuki in the 2nd to plate Anthony Recker. But he also pitched better than his results, which remained a respectable 7 innings for 3 runs. His pitches were back to his April standards, diving down and jagging to the right. The pitch to Stanton in the first, which had Stanton bailing out and popping up (and seemingly breaking something off his face mask), was just plain nasty.

The Marlins spent much of the day topping Colon’s pitches, and he was an economical as ever with 79 pitches in his outing. David Phelps was at 85 pitches through 4 innings.

Colon’s only Achilles’ Heel was Justin Bour, who is also Colon’s opponent at this year’s Summerslam. Bour, a sort of walking cube, let Flores’ grounder go through his legs in the first but set about trying to right his large ship over the rest of the game. He’s got an unfussy approach at the plate (like a left-handed Evan Gattis) but he’s not just a dead pull hitter. His flare to left center off Familia could have been as telling as his long home run off Colon. And with Juan Lagares’ worryingly gimpy arm, the Marlins almost tied it in the eighth.

Terry Collins has given up on the rest of the bullpen if the game is close. After Hansel Robles’ implosion last night (getting angry, throwing too hard, throwing too straight) Collins stomped out to pull Carlos Torres after one out and one hit, letting Jeurys Familia get a five-out save. Two-inning saves (and he’s had one already) could become frequent and might be one game away against the Padres. I mean, with that match-up being a late game, he’s had another six hours rest. He’ll be fine…

Collins’ hand has also been forced at third base by Eric Campbell’s and John Mayberry Jr.’s struggles. You could plop Michael Cuddyer at third and Mayberry in left if he could hit anything, even with Campbell stinking it up. But we’re now on option three… Ruben Tejada at third base.

The new line-up on the infield is notable for featuring three players out of their best positions. Daniel Murphy should be at third, Tejada should be at short, and Wilmer Flores should be at second. The Mets would win at least an extra game with that configuration.

But, of course, Terry’s hands are tied. Or, at least, operated by puppet strings from above. Wilmer has to play at short because he’s still learning the position (and he made a nice, if slow footed, diving grab in the first) and Murphy still needs practice at second before David Wright inevitably (or just maybe?) returns to third.

A lot was made of the series Tejada had, and it was nice to see him lace a double over Christian Yelich’s head. That was another game within a game… which player looked younger. Yelich (estimated age 16) beat Tejada (estimated age 17) on that one, but Ruben showed nice pop and a strong arm on throws to first. It’s just strange to see a kid at third base who will probably max out at 6 HR in a season.

Other things of note? Wilmer – now in joint-lead for home runs from shortstops – crushed a fairly nasty slurve from Phelps to left center. That ball was low and usually Wilmer likes it high. Anthony Recker – who would make a great catcher if he could hit – made a pretty play to second to catch the speedy Yelich. And Darrell Ceciliani – the Mets “replacement” for Matt den Dekker – has incredibly wet hands. He keeps rubbing them on the batter’s box before each pitch. Very odd.

The Mets take their six-man rotation to San Diego and Arizona next. Both teams are scuffling under .500. The Padres are underachieving and the Diamondbacks are –- a little like the Mets –- doing slightly better than their doomsayers predicted. I don’t think any of them are great teams, yet in a weakened NL being kinda good could be kinda enough.

Will going 4 and 3 be an achievement? The Metsies have been so lousy on the road, I think it would be. But you tell me in the comments below… go on, try and predict the Mets’ results over the next seven games. It will distract us from praying for the health of Familia’s arm and Wright’s ailing back.

Back Why Mets Fan Chris Mullin Threw Out First Pitch at Yankees Game
Next Game 52 Recap: What Do You Get When You Add David Wright…