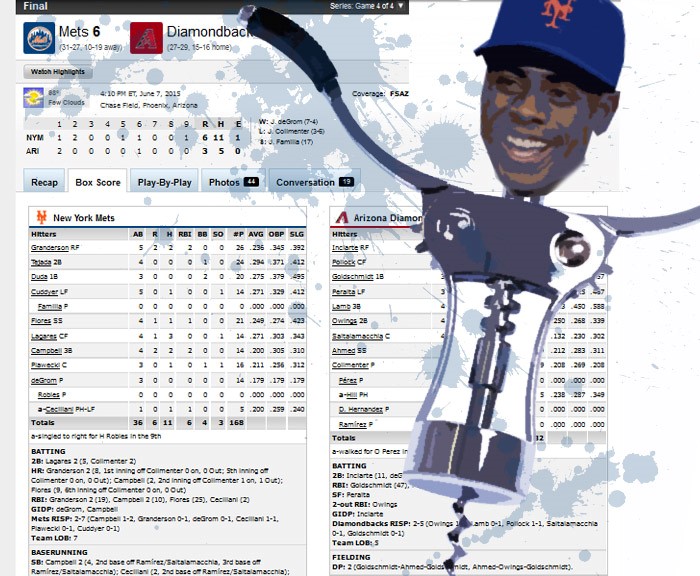 Last week, I said that it would be an achievement if the Mets finished their NL West road trip with a 4-3 record. The Metsies fell one game short at 3-4 but a half game up in the NL East. And they saved the best for last with an efficient win over the Diamondbacks, a team who seem to collect more logos than wins. They have a curly snake logo on their caps, a diamond “A” shaped one, a “db” snake on their arm and an ugly Dbacks one on their chests. Get classy, guys… get pinstripes.

The Mets’ only blip was Eric Campbell’s throwing error in the first that eventually led to a couple of runs. But you can be forgiven when you launch a line drive two-run homer in the next inning.

I’m still trying to figure out Campbell, especially on defense. He’s the Mets fourth option over there but he seems steady enough. He made a nice barehanded play that Owings beat out for a bunt single RBI. I also think Campbell’s a better hitter than his current numbers because his 0 for 168 (or whatever it was) is still dragging him down. He’s got a level swing and a little patience.

Wilmer Flores hit another homer to almost exactly the same spot as Campbell and added a pretty defensive play, snagging a hard hit ball in the ninth and throwing over to get Saltalamacchia. Salty can barely move, but Wilmer still did a nice job.

Wilmer is on a nice little eight game hitting streak and the switch from chewing gum to bubble gum seems to have improved his game. For a guy forced into learning on the job, he’s slogging his guts out. If you watch Wilmer’s face when he fields and bats, he rarely blinks. His eyes must hurt because he’s trying to concentrate so much.

My other favourite player (yet perennial figure of apathy) is Curtis Granderson, who cranked out two home runs to deep right. As Granderson ages, he’s torquing his body even further around. He’s becoming a corkscrew, and that exaggerated twist means that he doesn’t always keep his eyes level. He’s now pulling everything. Opposing teams: keep the infield shift and add an outfield shift too.

You know that Babe Ruth was also famous for torquing his body? Curtis is smart enough to have studied the great man, and I think he’s doing it to compensate for his lack of bat speed. Both homers were off breaking balls and Curtis is a breaking ball hitter who walks (or strikes out) to pitches he can’t catch up to. But I’ll say this again… his OBP is .345 and that ain’t bad. And he’s trying to fulfil a role in a line-up shorn of a bunch of its big hitters. Cut the Grandyman some slack, just for me.

Jacob deGrom was Jacob deGrom again, and in his last two starts he’s been stellar on the road. He spotted his fastball nicely, but his change-ups really caught my eye. DeGrom is a relaxing pitcher to watch. He works quickly and fields his position well. How did scouts miss this guy’s talent? He reminds me of the Dick Van Dyke character in Bilko (only older readers will get that). He’s a lanky and almost goofy athlete capable of everything.

The only downside in the game was an interminable eighth inning where the Mets padded their lousy stolen base numbers by adding four off the Diamondbacks’ J.C. Ramirez. If you thought Steve Trachsel was slow to the plate, watch this guy. We have a new “Human Rain Delay” in Ramirez. That meant the newly christened “Speedster” Eric Campbell stole two bases. I passed out after fifteen minutes and when I woke up the Mets had scored another run. I don’t know how and I refuse to watch the inning again to find out.

The Mets return home with a half game lead over the Nationals, who continue to stagger me with their relatively lousy record. I still think they’ll have a 10 game winning streak at any time, and they have to win 90+ games. But, you know what, the Mets have a nice run of games in June.

July might be the killer for the Mets… check out their schedule for then…. ouch. Will d’Arnaud be firing by then? Will Familia’s electric arm have exploded? Will Wilmer be eating popping candy?

Ah, just enjoy the ride. I am… and I’m still convinced the Mets are only $10m or so from being a contender. Hmm… maybe that’s the key. Will the purse strings be loosened?

Back First Place and the Credibility Gap
Next Mets Game 59: Loss To Giants