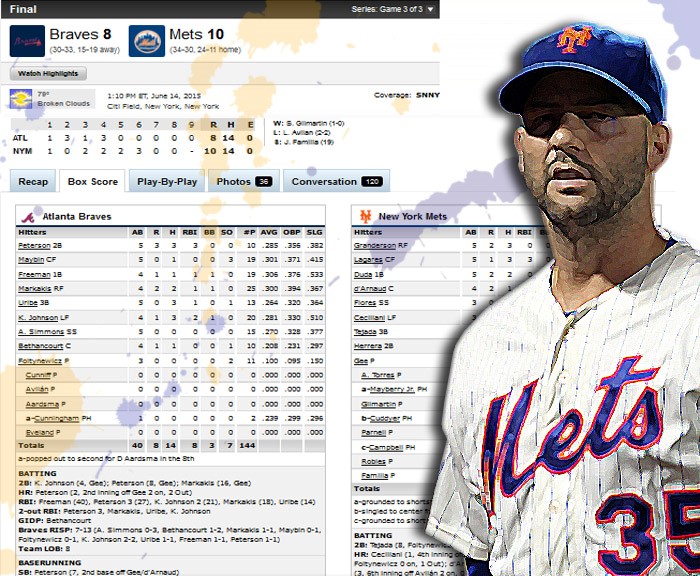 Why the heck was Dillon Gee starting this game? We’ll get to the comeback win later on, but the whole Gee thing is ludicrous. He moped around the mound, and rightly so. He’s pitching very poorly and leaving most pitches up, but some of that is because he’s utterly confused.

Gee threw gently gliding fastballs at the same 91mph speed and in exactly the same place while his change-up lazily hung waist high. You know you’re in trouble when Jace Peterson hits you for a home run. But Gee shouldn’t be in this position.

The answers to the Mets’ manipulation of Gee are, of course, obvious. There’s the Super-2 deadline with Stephen Matz (which has now seemingly passed). There are also the fluffy comments on not overpitching the Mets’ young arms (as long as you’re not Jeurys Familia). And there’s the $5.3m the Mets will grudgingly be forced to pay most of when they trade Gee for a AA batboy.

Gee strikes me as less hard-nosed than many baseball players. He needs encouragement that he’s doing a good job. He struck a disconsolate figure on the bench between the almost-four innings of Sunday’s horror. A silent Travis d’Arnaud sat awkwardly next to him. What could d’Arnaud do? Tell Gee he did matter to the team? Or send a quick tweet to Alderson to sort this out?

The sensible option would have been to tell Gee he’s a long relief pitcher this year. No messing around with the hint of starting pitching unless there was a long-term injury. Take your $5.3m and then run.

Gee was vocal about how he felt devalued by the team. That’s always a bad move, because you’re labelled as “hard to manage.” And he should have held back until this current mess. “I’m going to work in the bullpen as hard as possible” would have been a more PR savvy response. But you can only say that to an easy question. This mismanagement defies an easy answer for the guy.

The game itself was between the Atlanta Rangers and New York Blue Jays, who slugged 18 runs. Darrell Ceciliani’s homer was particularly crushed. Captain Kirk Version 2.0 is starting to kick into gear, perhaps due to the threat of a roll back the original version. They both strike out a lot, both field well (Ceciliani’s throw to home last night was great), and both will be on the fringes of outfields for their career.

Curtis Granderson got three hits in the game… all through where Fredi Gonzalez should have put a shift if he actually paid attention to games. You can’t blame Gonzalez for his pitchers leaving breaking balls high (Lagares, d’Arnaud and Herrera all dumped home runs to left on tee-balls) but you can blame him for this. He did the same with Duda too. Duda almost hit an excuse-me double down the left field line in the first, but that’s a one-in-a-hundred chance. Granderson is pulling EVERYTHING. He has to because he’s compensating for his age. Braves’ fans should be fuming.

After years of Mets fans being saddled with too many great teams in their division, the NL East has become little league. Remember the endless misery of watching the Braves’ pitchers every year, or Philadelphia shellacking the Metsies, or the Marlins sudden rises to success? I don’t care who the Mets beat, just keep beating them repeatedly. The Bizarro Mets – the actual Toronto Blue Jays – are next. They have a lot of hitting and a little pitching. Two utterly different teams on exactly the same record, both in largely weak divisions. And both are maybe Wild Card teams who’ll probably split their series 2 and 2. Ah, parity! You give everyone hope. Somewhere Bud Selig is hanging upside down and smiling.

Back Mets Game 59: Loss To Giants
Next This Third Baseman We’re Getting…