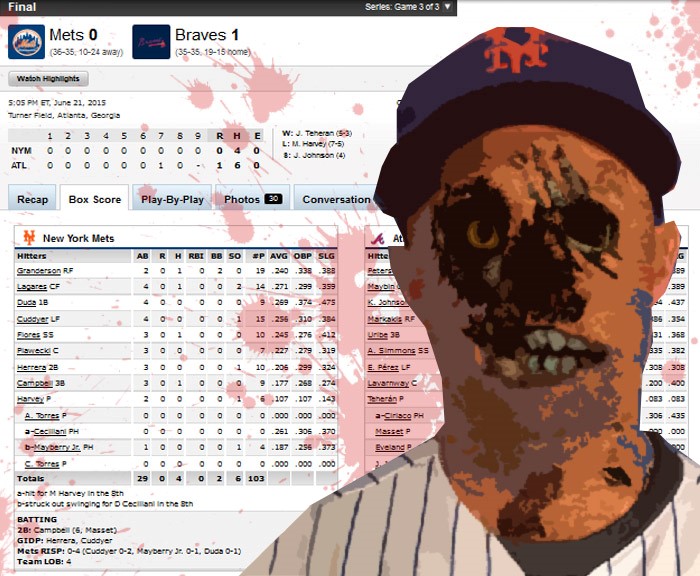 Sorry for the delay in getting this report out, but I have my reasons. 30 minutes after watching the Mets lose 1-0 to the Braves on Sunday, I had to rush to the toilet to vomit and then suffer the shakes and further sickness for another 24 hours. Is this what the Oh No Mets are doing to everyone?

Well, it was more of a coincidence. A family member picked up a stomach bug the day before and I’d gone into the contaminated zone to nurse them. But nausea and pain have gone hand in hand with the Mets recently.

The most telling image was Jacob DeGrom earlier in the week, who was pitching beautifully before the bullpen and defence lost the game. The camera cut to DeGrom on the bench. Where was his head? Had he decapitated himself out of frustration? Nope, the poor guy had just hidden behind the top of the bench so the camera couldn’t see the endless expletives he must have been saying. Jacob’s sullen face then dropped and looked at the ground.

You probably watched the game on Sunday and felt the same. Matt Harvey’s fastball and slider were working well and, once he fought through the first couple of innings, his only real issue was hanging a few curves. The Braves eventually scored on Harvey’s 112th and 115th pitches (in 90+ degree heat… hmm?) – on a scorched double from Levarnaway that almost cleared the fence and then a little bloop from Ciriaco. Juan Lagares launched a strong throw home (you know, that arm he’s supposed to be protecting) but it was off line.

The only vague moment of interest for the Mets was when they got runners on first and second in the ninth with one out. Then Michael Cuddyer topped the ball to third base for an easy double play. For a “gap to gap hitter,” Cuddyer is aiming a lot for the smallest gap on the field – between shortstop and third base. And why did the Mets keep trying to reach out and pull Julio Teharan (whose last outing gave up 14 hits and 6 runs to the B.O. Sox), who happily threw sliders and dinky fastballs just outside? The Mets were twitchy, pulling the trigger too early.

I know chicks dig the long ball and dudes like strikeouts, but guys like me and you and Joe on MetsToday like a crispy played game. Since the first away game with Toronto I started writing down the most horrific defensive gaffes from the Mets players, many of which cost runs. Not only that, they extend innings, dragging out the starters – hardly ideal in that 90+ degree heat.

Anyway, here goes: Grandy misses easy foul top up, Flores fails to time leap for easy catch, Herrera doesn’t cover second but Plawecki throws it there anyway on a steal, Lagares boots the ball, d’Arnaud has to catch a ball so far down the third base line his arm is nearly ripped off by the runner (and now he’s on the DL), poor baserunning, overthrowing the cut-off man (at least twice), failure to turn the double play x 3, Cuddyer lousy coming in on a soft liner, Lagares struggling to go back. The only starter who didn’t make some mental error was Lucas Duda. But you tell me if he did. I missed a bunch of stuff because I spent lots of time bashing my forehead against the screen.

I can take the Mets losing two against Toronto. But three against the AAA Braves? And here’s the worrying thing, I thought the Mets would fly in June given a soft schedule. Well, the only way they do that if it they REALLY beat up on the lousy Brewers and Reds. Because after that there are nine games against the Cubs, the Dodgers and the Giants. 2-7 in those games? I still haven’t reached Izzy/Nat (he’s back!) psychotic anger but even my optimism is being tested. Where are my pills?

I’ll finish on nice stuff. Father Stokes from THE WALKING DEAD was in the crowd. He’s a Mets fan and showed more animation than the zombiefied Mets. And Keith and Ron did a nice job on commentary. If I have one minor comment, it’s that Gary’s slightly higher pitched and speedier voice contrasts more distinctively with Keith and Ron’s laid-back tones. But their soothing voices

Back Mets Game 70: Loss To Braves
Next Defense Wins Championships