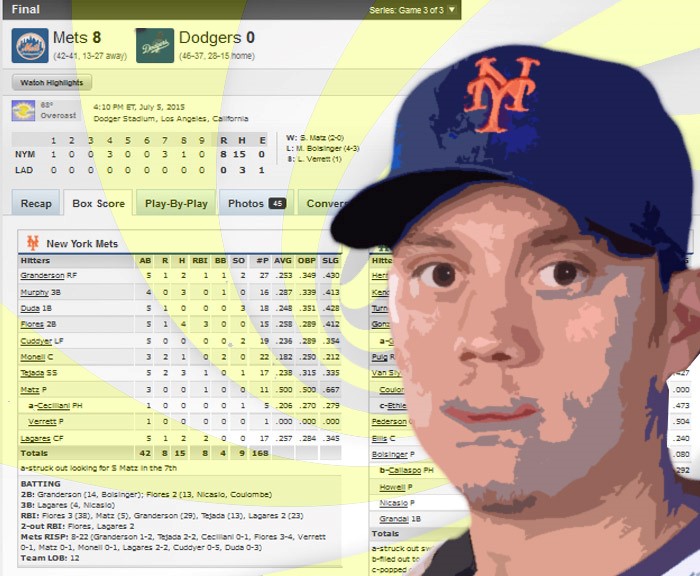 Much as it’s tempting to glance at the box score and assume the Mets played out a 0-0 draw over 20 innings before everyone passed out through sheer boredom, that isn’t a funky European Ø with a slash through it. It’s an eight. I had forgotten what they looked like.

After subjecting myself to the FOX coverage of the Mets game on Saturday, the dire mumbling and stumbling commentators did at least raise one point of value. The Mets were second to the Royals in hard hit balls in the major leagues. Second? I figured the Mets would only be second in errors.

Have we found the Twilight Zone? These numbers are baffling. And they raise another question. Have the Mets been unlucky this year on offense?

I can’t see it myself, and I’ve seen the vast majority of the Mets innings this season. But this game highlighted what a little luck can do. Out of the Mets 15 hits, only Wilmer Flores double in the 8th was a true liner (and even that narrowly shaded inside the left field line). Flores and Curtis Granderson’s other doubles were ripped grounders between Justin Turner and the line (six feet away from an out) and Juan Lagares “triple” (a.k.a. a laughable error by Yasiel Puig) would have been an out if not for that pesky sun in Los Angeles. L.A. rarely catches the sun so poor Puig’s shades couldn’t deal with the glare. We saw bloops (a couple from Murph), infield hits (nice cue shot from Grandy), and tricklers through vacated positions (Tejada’s grounder in the 4th).

On the pitching side, Stephen Matz got through six innings and Terry didn’t push him out there again in the seventh despite Matz being on just 101 pitches. Thank-you, Terry. Matz fell behind in the count throughout his outing, but he was able to pinpoint his fastball to catch up. His change was a little off – hence he didn’t use it much – but his curve was fine. He made Puig feel even more enigmatic/grumpy as he struck out on one. It’s impossible not to be impressed by the poise of Matz.

For the Mets to win two against the Dodgers in L.A. is a genuine achievement, despite the Dodgers not kicking on after their fast start to the season. Wilmer went 10 for 13 in the series, and his OPS has shuffled just above .700 again. Is being back at second making him feel more comfortable?

Lucas Duda and Michael Cuddyer continue to look lost at the plate, with a desperate Lucas swinging at curves way down and fastballs way up. Cuddyer also doesn’t see any pitches he doesn’t want to pop up. Meanwhile, Matz put in another professional AB to drive in a run on a slow grounder, so he could spell these guys in the Twilight Zone we’ve entered.

They’ll call this game a laugher. Well, I needed cheering up. So thank-you for this. The Mighty Morphin’ Power Mets will hopefully take down the Giants in the next three game set. I’m not banking on it, but then those guys are on a six game losing streak… including three against the Giancarlo Stanton-free Marlins. Huh?

The world doesn’t make any sense any more. But we are entering a wondrous land whose boundaries are that of imagination. I just hope the Mets exploit that and surprise us all.