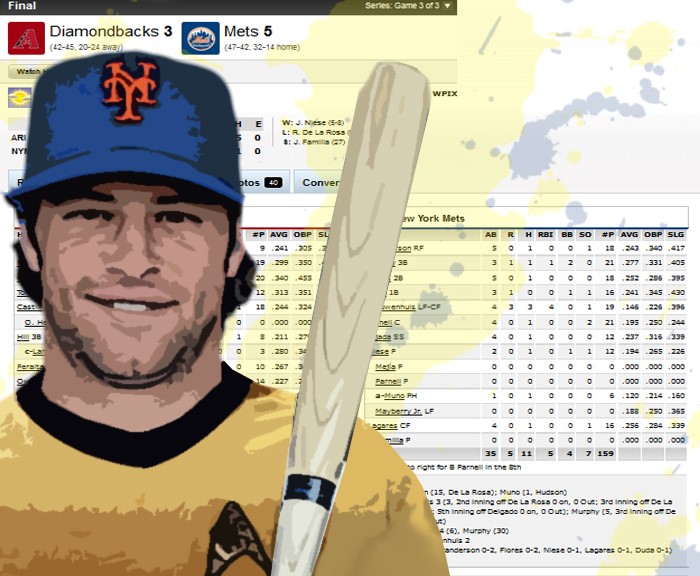 Doing its best impersonation of The Little Engine That Could, the understrength Mets have almost chuffed their way to the top of the hill. Of the back of their (unlikely) 7 wins out of 9, the Mets have hit a bunch of (unlikely) home runs and are within two games of catching up with the Nats in the NL East (won’t happen) and one game back from the Cubs for the second wild card (hmm… check out the Cubbie’s schedule).

If June was supposed to be the month of plenty, this was going to be the month of misery. It could still be after the All Star Break because the schedule doesn’t get any easier until August 3rd. But that’s the fun of baseball… y’all don’t know for sure.

The Mets have been semi-rejuvenated, so it was easier to wipe away the tears when Jon Niese replaced Steven Matz for this game. You know, that Steven Matz who Terry Collins pointlessly put in for another inning in his first MLB start and increased his pitch load way beyond anything at Las Vegas. But injuries are down to luck, huh? Urgh, let’s look at the positives…

It’s good to see the Mets hit a little, and nice to see Kirk Nieuwenhuis win the game almost single-handedly with his 3 home runs. Gary gleefully told us this was the first time a Met had done this at home, and it fits with the contrarian nature of the Mets that it came from a guy hitting .100 with no dingers. Next stop, Ruben Tejada is a late entrant in the Home Run Derby and he slugs to victory.

I watched Nieuwenhuis’s at bats a couple of times to figure out what was going on. In all cases, they were not as bizarre as Michael Cuddyer’s last homer, where Cruddy was as stunned as the ball was to hit the meat of his way-ahead bat. Nieuwenhuis’s at bats were accomplished, with him clearly trying to take the ball where it was pitched.

His second home run was perhaps the easiest of the bunch, but hit the furthest. Rubby De La Rosa (a largely unimpressive flame thrower whose change doesn’t do enough) had walked Lucas Duda on four pitches, and then threw a 96mph way low and in and a 86mph change way outside. The 2-0 pitch was – of course – a fastball down the pipe and Nieuwenhuis launched it just left of center.

My favourite of the three was his first. He worked the count to 3-2, including taking a 95mph heater on 2-2 just inside. The next one was the same velocity, but nibbling the outside corner instead. A good pitch… and a very pretty home run, because Kirk smacked that one the other way.

Kirk even made sure left field didn’t feel unloved, by socking a 3-2 change (this time off an equally unimpressive Delgado… who can’t control his fastball and whose change-up is too quick) two rungs up the right field pole. Let’s hope it found Murphy’s homer somewhere in the same stand and they made friends.

The Mets pitching continued to be stellar. Jonathon Niese is not a pleasant pitcher to watch. He either needs lessons in body language or physical therapy. He stands round shouldered and with a hangdog expression as he looks in. He twitches on the mound, tensing his pitching arm and fist, before returning to the bench with his head mostly bowed. He’s a poster child for an introvert.

Yet, on the basis of his recent pitching, Niese doesn’t have nearly as much to worry about as he thinks he does. His fastball was still only primarily in the high 80s, and when he did muscle up to 91-93mph they were balls that tailed far too much. But his pitches had good sink, and his curves ducked into righties more than earlier in the season. I like Niese, and he will help the Mets this year.

It was also nice to see Niese’s twin brother, Bobby Parnell, continue to excel in the eighth. It still feels an adventure for the bearded wonder but, like his brother, his fastballs have nice sink. And he was helped out by the last key part of the Mets recent run. Mets Defense, previously an oxymoron.

Lucas Duda made a sliding grab to get a foul pop from Paul Goldschmidt (who had broken his 0 for the series with a homer off Niese earlier in the game) and Grandy made a nice twisting catch over his shoulder to get the dangerous A.J. Pollock in the sixth.

I have no idea what any of this means. Any team can have a run… the Mets had their own 11 game winning streak at the start of the year. But it is pleasing this upsurge has been against better teams. Re-aligning Wilmer Flores and Ruben Tejada is helping, of course, but this team still needs more. It’s farcical the team with the 3rd best ERA in MLB is saddled with the 29th best offense.

I firmly believe the Mets should act this year, given the weakness of the NL. But I gotta know they won’t and – to echo Dan – that does suck. I don’t count Jenrry Mejia as a massive upgrade (I see him more as a trade piece), but how do you feel about his return? I’m intrigued. Terry ghosted him in for one batter in the seventh, and kept it low-key. Mejia looked raw, but he eventually got the out. But does his return annoy you outside of his performance?

Ok, enjoy the All Star Break and watching Jacob deGrom strike out Mike Trout. In a few days I’ll recap everyone’s Win-Loss predictions from the start of the season and see how the battle for some Mets’ crap, ahem, merchandise is progressing. Feel free to join in and say how many wins you thought the Mets would get at the start of the season. Stay honest, folks… hindsight is forbidden.

Back Terry’s Comments Foreshadow Disappointing Days Ahead
Next Mets: Justin or Bustin’ at the Trade Deadline?