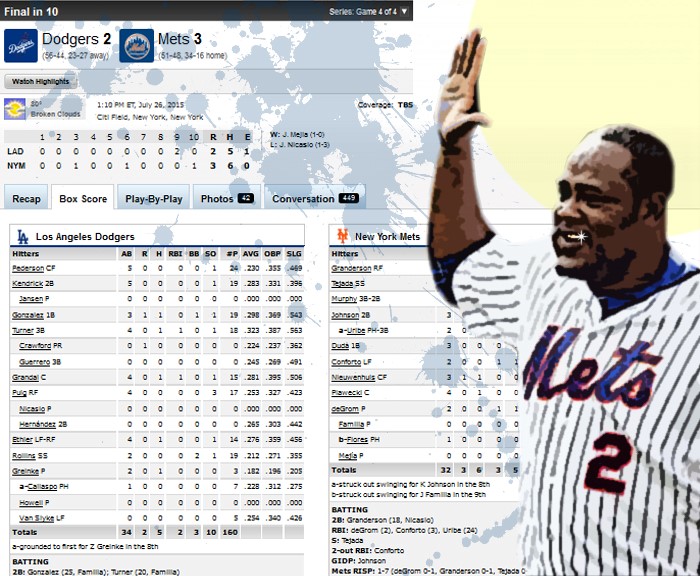 They call it the “Commentator’s Curse.” It’s when a commentator raves about a player and unwittingly sets them up for disaster. As soon as Gary said “The Dodgers have failed to get a hit EVER against Familia,” I knew there would be trouble. The Dodgers had gone 0-19 against Jeurys Familia up until that moment. Sadly, with a Kirk Nieuwenhuis-like bid for a respectable batting average, Adrian Gonzalez promptly smacked a long double. Gonzalez then scored on Justin Turner’s double to left center. Then Turner scored on Yasmani Grandal’s single just inside the third base bag. Well, the Dodgers were now 3 for 22 vs. Familia and the game was tied at 2. Urgh.

I’m not blaming Gary, of course. It was a strange outing for Familia. He couldn’t spot any pitches inside and when he reared back for 98-100mph heaters he was spiking them way down. When he fell behind in counts, he threw safer cutters they sat unhappily in the middle of the zone. Against the middle of the Dodgers order, that’s bad news. It could have been even worse, too, had Juan Uribe not flashed his underrated glove to make a sweet barehanded play on Kendrick to get the first out.

But, heck, these are the Newish New York Mets and not the old Mets who lost 4-3 to the Nats on Wednesday. In the bottom of the tenth, Curtis Granderson scampered a double, and following some farting around from Juan Nicasio (who makes Mike Pelfrey look fast to the plate) the Mets had one out and runners at first and second. Hello Kenley Jansen and hello my favourite of the new players, Juan Uribe. Juan dutifully crushed an 0-2 pitch off the left-center field wall, just falling short of matching Robin Ventura’s longest RBI single ever.

Leading up to that, it was hard not to sigh throughout a lazy bottom of the ninth and a typical Jenrry Mejia outing in the tenth. One of the kinda-newish players, hopefully on caffeine rather than anything stronger, Mejia is still a sucker for living on the edge. He walked Rollins, who stole second, then was bunted to third. Cue some extended misery watching Joc Pederson foul off pitches, including one nasty slider that just grazed his bat on 2-2. Next pitch? A 95mph fastball that Pederson swung under to strike out for the 119th time. A lazy fly ball later and Meija was out of it.

It’s hard to paint a player as talented as Pederson as the goat, but this wasn’t his best game. Aside from his 0 for 5, he botched fielding Plawecki’s spinning bloop in the third, which moved Kirk to third. Luckily, next up the Mets had the one position that leads its area in RBIs… pitcher. Jakob deGrom delivered again with a dribbler to first and Nieuwenhuis beat the throw home. Poor Zack Greinke lost his lengthy scoreless streak, and deGrom flashed his surfer boy smile.

Greinke and deGrom are first and second in ERA for good reason, but their stuff is nasty in different ways. Greinke throws a heavy ball, with late sink, pounding lefties and righties inside. Until the seventh, when the new dad started to tire, he repeatedly got lazy grounders with the batters shaking their hands from getting jammed. My favourite AB, though, was when he threw a bizarre pitch in the first to get the wildly flailing Daniel Murphy. It looked like a circle change, but it was at 90mph and moved like a hard slider. Forget the gyroball, I christen this the unhittoball.

Meanwhile, Jacob deGrom was plying his own trade of brilliant pitching. DeGrom doesn’t have the same sink on his slider, although he threw a great one moving outside to strike out Yasiel Puig in the seventh. DeGrom was predominantly just spotting his fastball. Inside, outside, and slightly above the strike zone. Constantly. Resulting in a huge amount of swing and misses. No wonder Kevin Plawecki forgot there was one out in the third and was doubled off on Ruben’s fly-out. His hand must have been hurting like crazy from catching all those laser guided 96-99mph strikes.

Watching these two pitchers go head to head was a hell of a lot of fun. I loved it. And for the Mets to salvage a split in the series is something for the Newish New York Mets to build from. Trade Murphy (I know they won’t…), move Uribe to third, keep platooning Flores/Johnson at second and Nieu-ish-huis/Lagares at center and then the Mets could average, oooh… 3.8 runs a game? That 0.3 extra still counts, and would make the Mets’s offense less eye-wateringly lousy.

The 4-6 run against the three top placed NL teams may not look like much. But it was better than many of us feared. And at least there’s the carrot of contending leading into the trade deadline. Are the Mets three guys away from the wild-card game? d’Arnaud (in a week or so?), Matz (in a month or so?) and a decent right-handed outfielder (Friday?). Or is it four? Five? You tell me. I definitely think the Mets need to sign that great Angels fan with the handmade Trout Net to encourage more homers. Prepare for the Grandy Grabber.

There will bumps in the road, of course, and it’s worrying that Michael Confonto seems hellbent on catching the Mets’ injury bug. In the past two games he’s clattered into both Ruben Tejada and Kirk Nieuwenhuis at high speed. Michael, there are thousands of innocuous ways you can injured as a Met. Don’t bring it on yourself, son.

Comment below on the Newish New York Mets, (sane) suggestions for trades and whatever else you fancy. The soon-to-be fire-selling Padres are next up for the Mets’ 100th game of 2015. There are 63 games left. 36-27 should leave them as the fifth best team in the league and faced with the Pirates. Well… maybe. Share your thoughts and we’ll let the final Mets-o-Meter judge us.

Back The Metssiah Arrives
Next A Reyes Reunion? What Say Ye?