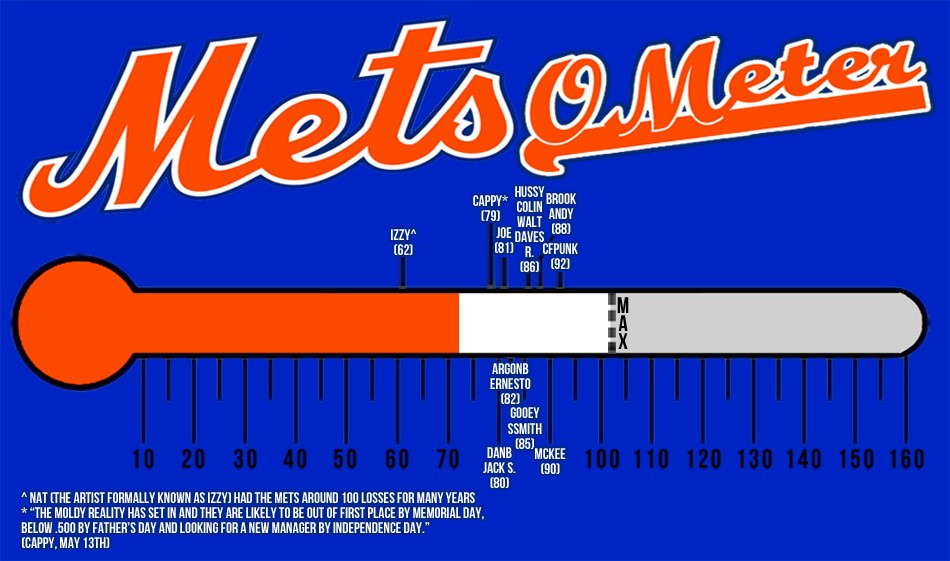 Looking at the Mets-o-Meter, the optimists seem to be the realists… which is damn rare for Mets’ fans. And if the Mets win 87 games I get to win my 86-88 spread bet AND not shell out money for tacky merchandise prizes. Lets Go 87.

Two months ago, who woulda thunk Brook and Andy would be favourites to get the correct win total? CF Punk, who seemed loopy and is still in training for his MMA career, might take it all. Punk, you’re a smart guy. Izzy, who is loopy and can still be seen shouting from a soapbox, is the first man down. Izzy, we still miss you.

Today’s win over the Red Sox was a good one. The Red Sox illustrate the strength of the AL. They look like an ok team and yet they’re still in last place. Wade Miley has essentially the same stuff as Jonathan Niese – in fact, his fastball has more bite – but Miley has more than a half-run higher ERA. Hey ho, he doesn’t usually face pitchers. But maybe he’s looking forward to that again, after Noah Syndergaard laced the first RBI.

Syndergaard pitched a nice game but ended up giving up 4 earned runs. Uncle Terry decided to stretch him out into the seventh inning and Syndergaard started to rely too much on his fastball. Jackie Bradley Jr. hit a ground-rule double to knock out Syndergaard on his 111th pitch, and then Mookie Betts had a strange bloop triple to plate Bradley.

I have no idea where Michael Cuddyer was on the play. The camera focussed on the ball landing and no-one was in shot. That went on for a while as Betts hared around the bases. Was Cuddy having a cigarette somewhere else?

Hansel Robles gave up the triple and also did a terrible job of keeping an eye on the runner on base. Even with my balky calves, I could steal third base off him. The addition of Addison Reed is a great one, but I’m nonplussed that Logan Verrett was demoted instead of Robles. Verrett’s tight slow change (I still think it’s a “Fosh”) beats Robles’ straight fastball, and I know who I’d prefer on a postseason roster.

It seems that the bullpen is the last nuance that needs to be figured out before the Dodgers on October 9th. Tyler Clippard continued to look meticulous in relief, using a fastball up and away to strike out Sandoval with the inherited runner on third. Jeurys Familia made things interesting in the ninth by letting the first two runners reach base. But then he started throwing an unhittable 96mph splitter and, with the tying run on third, he struck out Betts with a high 100mph fastball.

The combination of Clippard and Familia is flat-out nasty, and Sean Gilmartin is a great foil. You may think this guy is here for just one season, but he’s better than that. The contrast of the slower, more measured Clippard and Gilmartin dovetail well with all of the Mets hard-throwers. That will be all the more important when Matz returns this week. Robles can only be successful after Bartolo Colon or Jon Niese, because the change in speed makes the hitter uneasy.

Offensively the Mets were unlucky all night, but they still scraped together enough runs to win. There were a hell of a lot of lineouts and the umpire with the Marty Feldman eyes had a crazily wide strikezone. Curtis Granderson got caught looking at a couple of pitches clearly outside the plate. Luckily Marty’s eyes couldn’t look up and down, and that let Cuddy get a walk on a curve slightly higher but clearly over the plate. That freebie led to one of his two runs.

I’ve called Cuddy “Cruddy” but he had a great game at the plate. And I do like the guy. He’s an amiable cross between a coypu and a human and he’s been hitting well since his return from injury. He knocked in Daniel Murphy, who had stolen second base after a high throw from the Soxs’ rookie catcher. Just be careful with all the double fist punches, Murph. You might pull something and you’ve got free agency to worry about.

Juan Uribe, who I think is a must-sign for next year to replace Murph, had a couple of hits including a long double over the fast-footed Betts to plate Murph and Cuddy in the sixth. His upper cut swing is fun to watch and its success is testament to his quick hands. He looked fine at second too, diving to keep one hard grounder from reaching the outfield. Some sort of job-share between Tejada (whose defense was superb) and Flores in the middle infield can only help this team in 2016.

So on the Mets roll. They next face a Phillies team so emasculated that the SNY graphic has cute pink glowing neon around their “P” logo. And the Nationals? Well, they’ve got the Cardinals. Good luck, Bryce!