I DIDN’T BELIEVE WHAT I SAW… BUT NOW I GOTTA 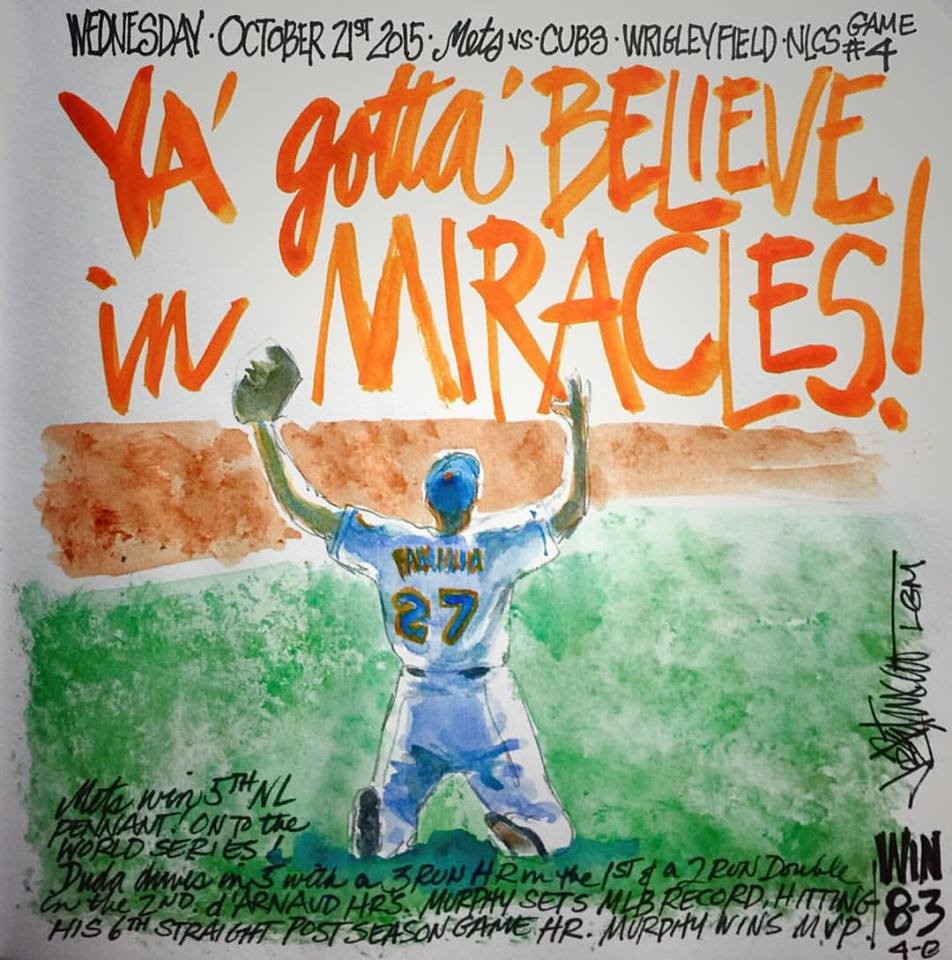 Thanks again to Joe Petruccio for the artwork above, and please check out his fantastic work on his Facebook page and Instagram.

Watching Jeurys Familia drop to his knees after sealing the sweep almost made me do the same. As a very long suffering Mets’ fan it felt more likely that Familia would get beamed up by aliens and replaced by a turnip who’d give up the lead run. I thought the Mets would beat the Dodgers… but the Cubs? And to never trail for a single inning? This time we’ve really entered The Twilight Zone

The Invasion of the Body Snatchers

pod replica of Daniel Murphy did everything right AND managed to come across as humanoid in interviews. TBS Back to the Future

with his 5 RBIs. And TC finally morphed from Ol’ Potato Head

into an adorable version of E.T.

I watching both series with my mouth open as I marked my Film students’ screenplays into the wee hours. The kids who struggled with names now have Murphy, Wright, Wilmer, Curtis and others as their characters. A guy named Familia now captures a serial killer. Thank you, Jeurys.

Let’s try to break down the insanity of the Mets success:

We knew the Mets’ pitching would be good and they’ve met those expectations. If you take Tyler Clippard out of the equation, the Metsies have been kinda great. Sure, they’ve had to grind it out at times – deGrom’s win in the LA decider, Familia with a couple of runners on base – but the power pitching of the Mets has proved as suited to the playoffs as we had hoped.

I’ve been trying to figure out some sort of different angle as to why power pitching works in the playoffs. So here goes…

The Mets power pitching plays in all conditions… but it’s ideally suited to cold weather ball. From the jarring foul balls and broken bats that make your hands sting for 10 minutes, a power pitcher has an advantage over a shivering hitter.

You can also see another effect by comparing R.A. Dickey to these guys. Dickey’s knuckleball is ineffective at the start of the season and – seemingly – indoors. He needs the baseball seams to “bite” the air to create movement. I played cricket and a cricket ball also “bites” more when the weather is humid. The heavier the atmosphere, the more swing you get (Argonbunnies, insert your choice of innuendo here).

The Mets threw some excellent breaking stuff, but they also knew they could rear back and throw the fast stuff at will. Meanwhile Jake Arrieta and Jon Lester didn’t quite have the gun speed. Arrieta actually looked a little ill, too.

Familia has been staggering. No wonder he caught that serial killer. He seems utterly fearless, which is easier to do when you have a 94mph split finger to fall back on. Never mind swinging at the pitch, I’d just run away.

And wasn’t it great to see Bartolo Colon trundle out of the bullpen? I don’t care whether it’s ice or cholesterol in his veins. He saunters in and out-chickens the opponent. What made Kris Bryant swing on that three and two pitch sinking way down? Because Colon spent the whole season throwing strikes. Big Bart will double up with The World Series of Baseball and Poker.

The Mets offense – bar a couple of breakout games – did just enough. Travis d’Arnaud and Yoenis Cespedes haven’t exactly caught fire, but they’ve popped a few homers. It was nice to see all of the lineup (including the pitchers) working at bats… and that started with the excellent Grandyman.

Curtis Granderson keeps grinding out two-strike at bats and he’s reined in his home run swing. He’s opened up his stance a little bit against lefties, and is fiddling around with some bunts too. The key is he’s making contact… striking out only five times in nine games. And for all of David Wright’s struggles, he still knows how to take a walk. Which was lucky given who’s batting behind him… SuperMurphy.

Daniel Murphy – The Metsiah – is aiming to match his usual 162 game homer total in the postseason alone. These are not cheap home runs either. Most of the shots have traveled over 400ft. What did they do with the real Murph? He’s been nicely humble in interviews and doesn’t really know what’s going on either. Kevin Long has apparently been helping him “get his foot down earlier” but, right now, Murph would probably hit a homer while bouncing on a pogo stick.

While the Mets defense hasn’t been infallible, it’s failed a lot less than in the regular season. And its effectiveness starkly contrasted with the Keystone Cubs outfield in the last series. Kyle Schwarber might be the next Babe with the bat, but he was channelling The Dude in the OF with his glove.

SuperMurphy has excelled here too – of course – with some nice diving grabs. But credit also to Duda at his natural first base position. He’s done a sweet job picking up tough hops and skidding throws to first base, and he’s justified his inclusion over the increasingly ossifying Michael Cuddyer.

The Mets baserunning might be the greatest deke of all time.

The Mets spent the regular season being mostly inactive on the bases. They were last in stolen bases. They left their best basestealer (Eric Young, Jr.’s speed is his one lonely tool) off the postseason roster. They also made comical gaffs on the basepaths, led by Lieutenant Dan “No Legs” Murphy.

It was all a clever ploy. SuperMurphy was setting up the NL. My most indelible memory of the post-season so far was watching – mouth wide open again – as Murphy nicked third base on Duda’s walk. That stolen base played a huge role in beating the Dodgers. And it took my breath away.

Murphy was seemingly in standard mode… a cross between a nervous squirrel and a hyperactive meerkat. He desperately looks around him as he takes a little lead. His head is spinning everywhere and he sees threats in all directions. Uncle Terry – as if warning his great-nephew to behave at a swimming pool – has rightly told Murph: “If you run, only bad things will happen.”

And yet Murphy went. And I cursed at the screen. And Murphy made the right decision. And SuperMurphy had proved me wrong. Again. At the start of the postseason, I wanted Kelly Johnson in the lineup instead of him… (Gulp).

On a personal level, I’m having a blast. The games finish between 4-6am here but I’m there for every minute. Dayjob be damned. I’m a diehard (and we are hard to kill) Mets fan but also one who appreciates this set of players. Most of the team is developed from the Mets system and the vets like Grandy, Wright and Cuddyer are very affable. Even SuperMurphy has only played the pious card once and he’s been charming and funny in interviews.

The other twist is that I like the Royals too, primarily because they play the best defense in either league. The Royals pitching is fun too… either terribly good or flat-out terrible.

I desperately want to Mets to win, of course, but the thought of this pitching strong team of destiny facing off against a superb AL team is a doozy in itself.

The Greatest Show On Earth? It’s up next…