Is the NL East the Weakest Division in Baseball? 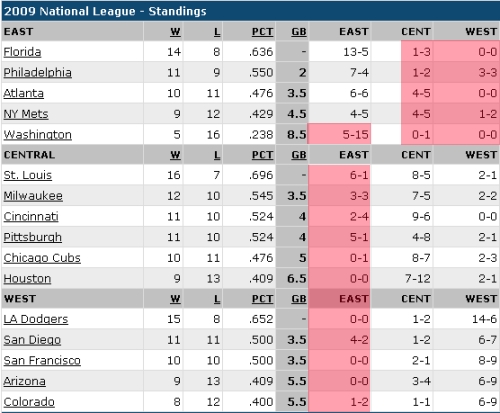 It’s WAY too early to know where any division falls in terms of strength or depth, but here are some random facts that I’ve noticed about the NL East so far:

What does it all mean? It’s too soon to tell, but I wouldn’t be surprised if this trend plays out over the course of the season, more or less…

If that happens, the divisional race is going to be chaotic. If the entire division is getting beat up by the Central and West, ANYTHING could happen.

The wildcard would most likely be out of reach, but the division would be up for grabs. Again, IF this happens, you really can’t count out the Mets (or any other NL East team, except for the Nationals who are just flat-out awful) until well into September.

So I guess what I’m saying here is, the division could come down to the final week of the season once again – but this year, the Mets and Phillies could have company.