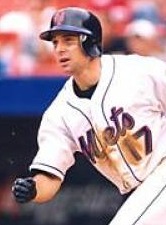 Today is the 46th birthday of 2000 trade deadline acquisition Mike Bordick. Believe it or not, it took four players to rent the services of the gritty leader from Baltimore: Mike Kinkade, Leslie Brea, Pat Gorman and Melvin Mora were sacrificed in the deal.

In 56 games with the Mets, Bordick batted a serviceable .260, with one home run and 15 RBIs. His OBP however, was a solid .365. However, he was in worse in the postseason: he batted .167 in the NLDS, a robust .077 in the NLCS, and a smoking .125 in the World Series. After the season, he exercised his right to free agency and promptly returned to Baltimore. Bordick was always a favorite of broadcasters, coaches and teammates for being a true professional.

Back Mets Game 97: Win Over Cardinals
Next Bay Resting Hamstring