Heading into their 50th anniversary season, the Mets have made a noticeable effort to become more fan-friendly.  They’ve announced several changes this offseason that show they are listening to their fans. 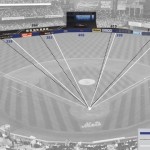 First, the Mets redesigned the outfield wall in Citi Field to make it fairer, particularly for David Wright and Jason Bay, who seemed spooked by the original dimensions of the new ballpark.  And conventional wisdom states that offense sells tickets.  The walls will also be colored Mets blue, a feature most fans have clamored for since Citi opened.

Returning by popular demand is Banner Day.  This was a distinctly Mets tradition that started in 1963 and ended in 1996.   Fans would parade around the field at Shea Stadium with signs ranging from words scrawled on a bed sheet with a marker to carefully-designed placards, all of which allowed fans to express their singular passion for their team.  Think of it as Twitter in poster form.  (As such, the 2012 edition of Banner Day could be quite interesting.) 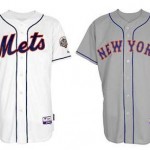 To the delight of traditionalists, the Mets have introduced new uniforms for 2012 that are reminiscent of the original uniforms of the 60s and early 70s.  The black and blue cap has been eliminated, and the black jerseys will only be worn on occasion.  The black drop shadow has been removed from the ivory pinstripe, snow white, and road grey uniforms.  These three uniforms will be worn with the all-blue hat with orange “NY” logo.

The 50th Anniversary patch will be worn on the uniform sleeves and on the back of the caps.  It’s a classy design that erases the memory of the tacky Citi Field inaugural season sleeve patch.

The team has a new 15-game plan that, according to the press release, “provides fans the flexibility to pick the games they want.”  They will also offer four 20-game plans, two of which consist of weekend games and holidays.  Five-game plans start at $50.

Shannon over at Mets Police has a tremendous analysis of the new plans.  Sounds like the jury is still out on how affordable these plans will be.

The Mets have done a lot of things wrong over the past few years, and have received justifiable criticism in return from the fans and media alike.  When it comes to celebrating their 50th anniversary, they’re doing it right, and should be praised.

Will it make up for a mediocre on-field product while the rebuild takes place?  No.  Will it make the experience at Citi Field more enjoyable?  Yes.

Mets fans are a loyal, passionate breed.  They’ve been through the wringer countless times and stuck by their team.  They deserve to be heard, and the Mets are finally listening.

Back Outbid By Small Market?
Next Pridie Gone, Evans and Buchholz Free