John Franco is a Mets Hall-of-Famer 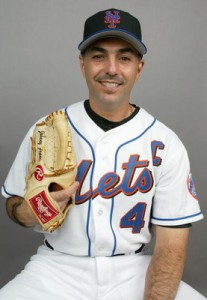 Today, the Mets announced that John Franco will be inducted into the Mets Hall of Fame this season.

The long-time Mets closer compiled 424 saves in his career, good for fourth all-time.  276 of those came as a New York Met.  Unlike the man for whom he was traded, Randy Myers, Franco didn’t fit the power-pitcher mold.  He instead relied on a changeup that moved away from a right-handed hitter, much like a screwball.  Most batters found it too tempting to lay off, especially when they were behind in the count.  Because of this pitch, and his lack of a notable slider or curve, he was often more effective against righties than lefties.

During his career in Queens (which lasted from 1990 to 2004), Franco was generally a solid closer, despite his disturbing penchant for loading the bases before recording the third out of the ninth inning.

In 1999, Franco abdicated the closer’s role to Armando Benitez after a trip to the DL.  From then on, Franco transformed himself into reliable setup man.

The defining Mets moment for the St. John’s graduate came during the 2000 NLDS versus the San Francisco Giants.

In Game 2 in San Francisco, The Mets went into the bottom of the ninth with a 4-1 lead.  However, Benitez allowed 3 runs to blow the save and send the game into extra innings.  The Mets answered, scoring a run in the top of the tenth to take a 5-4 lead.

After allowing a leadoff single, manager Bobby Valentine brought Franco in to relieve Benitez.  Two outs later, Barry Bonds stepped to the plate with a chance to win the game with a long ball.  Franco and Bonds battled, and the count reached 3-and-2.  On the payoff pitch, Franco grazed the inside corner with a changeup to strike Bonds out, and end the game.  Bonds couldn’t believe it, and the momentum of the series had swung the Mets way.

Now, 12 years later, Franco will attain Mets immortality on June 3.  He wasn’t always perfect, but he was better than you remember.  He was a team leader and a true Met.