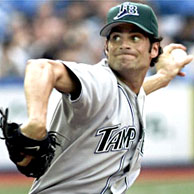 According to the Buffalo News, the Mets have signed Casey Fossum to a minor league contract. It wasn’t reported, but it’s expected that the lefthanded Cherry Hill, NJ native will be invited to spring training.

The Mets also signed Buffalo Bisons fan favorite Jason Cooper, a 28-year-old, lefthanded-hitting outfielder with little chance of making the big club but who has strong ties to the Buffalo community. Cooper, a career .255 hitter in the minors with 99 homeruns in seven seasons, is the Bisons’ all-time leader in games played with 410.

Fossum, who turned 31 on January 6th, has been derailed by injuries and ineffectiveness. At one time in his youth, Fossum was the crown jewel of the Red Sox farm system, an “untouchable” who eventually became the centerpiece of the trade that sent Curt Schilling from Arizona to Boston. Battling through several injuries to his shoulder, elbow, and back, Fossum has bounced from one organization to the next, never quite fulfilling his early promise. He sports three curveballs, one slower than the next (including the “Fossum Flip”) — think of Pedro and El Duque’s sleepy hooks in terms of speed and bit, except coming from the left side. His fastball rides in the high 80s, and he also throws a mediocre change-up and an occasional slider.

With a career 5.47 ERA and 1.51 WHIP, “The Blade” is holding on to his career by a thread, and would probably be working at the Modells in the Cherry Hill Mall by now if he weren’t lefthanded. He’s failed as a starter, a long reliever, short reliever, and LOOGY. Still, I’m pleased by this move, as the Mets need all the arms they can find. Put him in AAA and let’s see what happens — you never know.