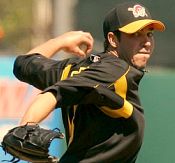 Only a few days ago you saw that former first-rounder Sean Burnett was pitching well in winter ball, and might be on his way to a successful comeback after several arm issues.

Well wouldn’t you know that the Pittsburgh Pirates have just DFA’d Burnett, to make room on the roster for Ray Olmedo?

I realize we think the pitching staff is “done” with the addition of Johan Santana, but it would be nice to pick up a few arms to re-stock the depth in AAA now that Philip Humber and Kevin Mulvey are no longer with us. Burnett could be a cheap, low-risk, high-reward acquisition to keep in the minors and possibly help the team at some point in 2008 or 2009.

According to reports, Burnett was healthy and pain-free all winter pitching in the Venezuelan Winter League, and had a strong showing during the Pirates’ minicamp in early January. He’s pitched the last two years in AAA but wasn’t terribly successful — though, he was recovering from Tommy John surgery. Why bother with a little lefty with a 5-5 MLB record and a history of arm problems? Four reasons: one, he’s a former first-rounder, so he must have some kind of talent. Two, he’s a lefty, and we need more of those. Three, he never relied on overpowering batters — he was considered a crafty, smart pitcher — so there’s a good chance a loss in velocity won’t damage his effectiveness. Finally, he’ll come dirt-cheap, and with low risk.

I say jump on him, sign him to a AAA deal, give him an ST invite, and see what happens. There’s plenty of room on the 40-man roster right now.

Back Mets Winter Wear
Next Did the Twins Get Fleeced?