Bret Boone is Back 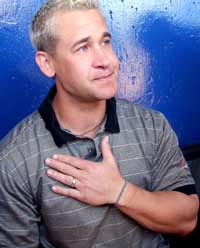 After muddling through the transactions over the past week, I couldn’t help but take note of Bret Boone’s return to the ballfield.

According to the Washington Post, he’s doing better than expected:

“We didn’t think he’d be this far advanced” in his conditioning and baseball skills, said General Manager Jim Bowden, who watched Boone work out Friday. “And certainly, he can compete with the players in this camp. . . . We have a small window to make a decision here, so it’s more valuable to have our asset here than it is to wait and stall his progress.”

During Saturday’s infield drills, Boone stood in at second base, along with incumbent starter Ronnie Belliard, while Felipe Lopez — who is considered a candidate to start at either middle infield position — worked out at shortstop along with Cristian Guzman. Boone has said he is not interested in switching positions or playing in the minor leagues.

“Obviously, if this is going to work and I’m going to go out and play for another year or two years,” he said, “this is not going to be normal spring training.”

According to inside sources, he has yet to shed a tear.

Back Shannon Stewart Off the Market
Next Gotay Could Be Gone