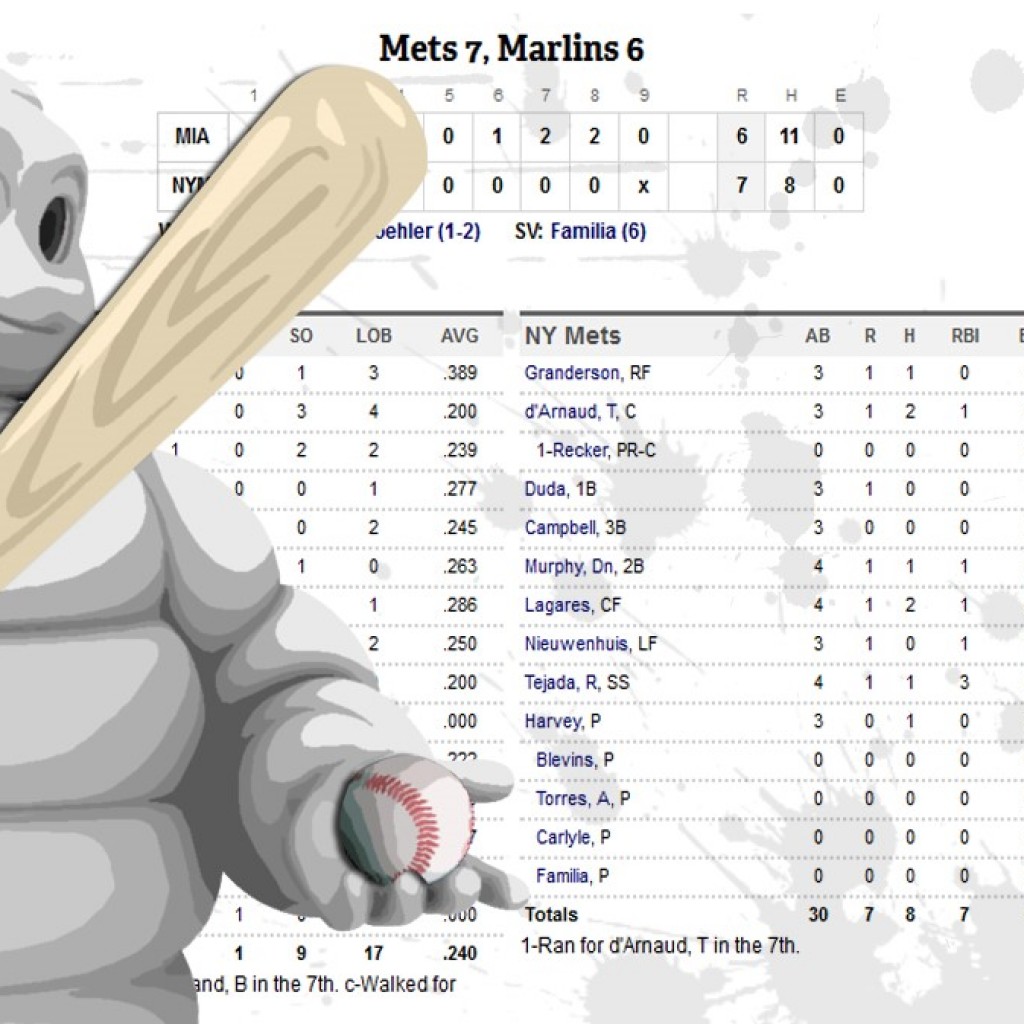 As SNY’s Gary Cohen told us that Buddy Caryle “bent but didn’t break” at the end of the eighth to preserve the eventual 7-6 win, it was hard not to wince. The Marlins couldn’t beat the Mets in a single game but they managed to break a couple of them.

The loss of Travis d’Arnaud to a broken hand – albeit with Kevin Plawecki filling the void – is very harmful to the 10 and 3 Mets. d’Arnaud was hitting a groove with a nice, flatter swing and he’d improved on defense. Yeah, he just touched one of Matt Harvey’s up-and-in fastballs (official scoring: wild pitch… hmmm) but it’s been apparent his recovery from injury has meant his throwing improved dramatically. He also made a nice play on a pop-up on Prado in the fourth. Even d’Arnaud’s batting had improved and he ripped a couple of hits in this game. He has looked compact at the plate and the Mets will feel his loss, regardless of how you think he calls a game.

The loss of Jerry Blevins will get fewer headlines, but I’ll miss the guy and Mets’ fans should too. I’d written down how nice his glove flip play was and then it turns out he did it with a broken arm. His sweeping curveball looked unhittable (and actually was) to lefties and his body language displayed a guy who wouldn’t crumble under pressure.

A forearm break to Blevins’ pitching arm is terrible news. The knock itself looked pretty innocuous and Blevins was able to grip his hand afterwards. But – having broken my own arm and hand three times playing with damned leather balls – you don’t know about it until a half-hour later. The forecast is six weeks but it will be much longer than that. Even after the bone has healed, your arm feels like it’s burning if you move it a maximum speed. I’m hoping he’ll use the time off to strengthen up and post more comedic Twitter posts. 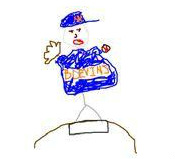 I loved one with a portrait of him. Heal up quickly, Jerry.

The game itself showed the Mets’ politeness despite the Marlins attack on their players. When you know you’ll win in the end – and the Mets have that swagger about them – it’s only right you give the other guys a head start. The Mets didn’t bother to hit anything for the first three innings, wafting at pitches early in the count.

Even Matt Harvey (apparently laid low by illness) was leaving his fastball and change-up too high in the zone. Harvey did start to nail his pitches – especially his curveball – late in the 3rd and he’s mimicking Bartolo Colon’s approach of not walking anyone. Together they’re 6 and 0. I guess just throw strikes – and Harvey threw 63 of his 84 pitches for them – and let your opponent beat themselves. That says something about the standard of the NL East.

The Mets’ record is better than the quality of the team. But it’s fun to watch. Ruben Tejada even got in on the act, plating three with a muscled-up double. The Mets will regress (you think they’ll win 100?) but if they can get to 86-89 wins, I’ll get some money and they might make the playoffs.

It’s been strange to watch the Marlins. I didn’t think they’d be a great team despite their signings, but Marcell Ozuna’s lazy approach to Curtis Granderson’s single in the 4th shows you what the Mets have in Juan Lagares. Are the Marlins lazy? Giancarlo Stanton calling out the team might help. They have too many pieces to fail this badly. And Stanton – a computer generated version of the perfect baseball player – will carry them at times. Let’s hope when they get on their inevitable run they’ll be facing the Nationals.

Don’t call me a Pradophile but I love watching Martin Prado play. Ignore the fact he kinda botched Lagares’ double in the 9th. He barely ever screws up and his easy single off Harvey in the first shows what a natural hitter he is. I’d love to see him playing second base for the Mets, but maybe the price was too steep for the spendthrift Metsies.

Oh well. Daniel Murphy will probably heat up and he pulled a nice RBI hit to right. Before today, it had looked like he was been playing catch with left field because he’s been so late on the ball. But, except for his gaff in the first inning of the season, his defense has been almost acceptable. He should have turned the double play in the second but it wasn’t an easy one. Ultimately, I am tolerant and not a Murphophobe… so I hope for the best for him.

The sellout crowd was rocking and – even as the bones were breaking – the Mets keep rolling. Just, please, PLEASE, wrap all the Mets’ players in the padding that’s around Alex Torres’ head.