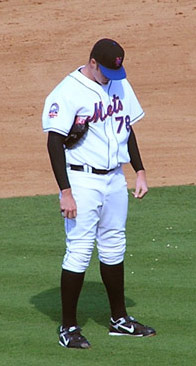 I’m not sure that Eddie Kunz is as ready for MLB as everyone would like, but he already has some “color”. See that photo to the left? That’s Eddie Kunz after finishing his warmup pitchers, right before taking the mound. He stood for about five or ten seconds, apparently in some kind of a zen pose or personal psyche-up session. It reminded me of an old-time closer known as “The Mad Hungarian”, Al Hrabosky, who used to talk himself into a frenzy before pounding his fist into his glove and taking the mound. The point of the routine was to either intimidate the batter or at least let him know that Hrabosky was out of his mind.

Since this was the first time I saw Kunz in a game, I don’t know if this moment of meditation is something he does all the time. I hope it is … it would be nice to see a bit of character and individuality added to a game that has lost quite a bit over the last 25 years. Enough of the cookie-cutter ballplayers!

Another note on Kunz: his body type and pitching motion are both similar to Mets setup man Aaron Heilman. See the comparison below — Kunz is on top, Aaron’s on the bottom. 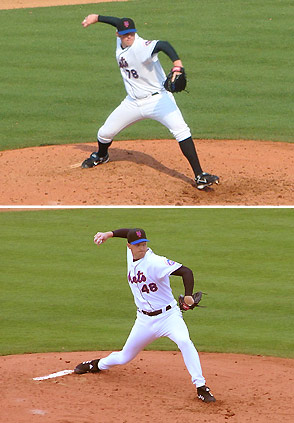