It was a close game … until it wasn’t.

I didn’t see the entire ballgame so will be brief based on what I saw.

Dan Dunn should get glasses, not only because he can’t seem to find the plate when handed a lead and walks the leadoff batter, but also because if he gets the right frames, might resemble Walter White — and THAT would be intimidating. 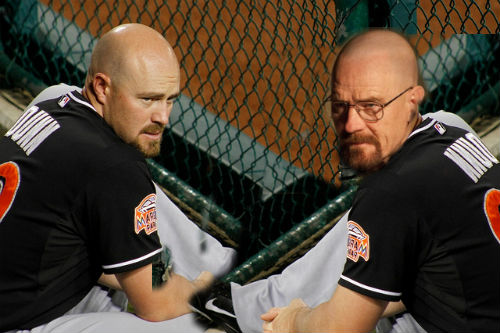 Speaking of semi-doppelgangers, every time the TV cameras veer into the Mets dugout, I have to look twice to decide whether I’m viewing Michael Cuddyer or Kevin Long. The trick I’ve figured out is that if the man is wearing a jacket, it’s probably Long. Usually.

From the bits and pieces of Mets games I’ve seen this year, the Wilmer Flores / Daniel Murphy tandem up the middle so far is not quite providing enough offense to make up for the other deficiencies in each player’s game (which includes baserunning and mental execution in addition to defense). Of course, that judgment is based entirely on my non-scientific, non-statistical, eyes-only analysis, with no numerical measurement nor backing. It’s also a very small sample size.

Toward the previous comment, my curmudgeonly attitude toward official scoring continues as hits continue to be awarded on plays that should be errors. Also, there are many cases in which no error is marked in the box score, even though an error is made. For example, Murphy committed at least three “errors” by my count during this ballgame, but was charged with none. That was mostly due to official scoring rules, but just because something doesn’t show up in the boxscore, doesn’t mean it doesn’t negatively affect the game and, either directly or indirectly, the final score.

Going back to Dunn, the Mets had him on the ropes and he somehow managed to squeak out of it. He couldn’t buy a strike yet found a few somewhere, then was bailed out by a double play. The game could’ve turned out soooo differently had Lucas Duda not swung at ball four. No criticism on Duda, who should have been swinging there if he felt comfortable doing so on that pitch, but it’s amazing how razor-close to disaster Dunn was, and moments later escaped. That’s baseball, right?

More on the Marlins bullpen in this series, not necessarily in this game …

A.J. Ramos has an outstanding stat line in his career against the Mets, yet it seems like every time I see him pitch against them, he’s awful. Must be dumb luck.

As for the Mets bullpen …

Has Alex Torres‘ effectiveness been tied to batters being distracted by the Elephant Man protective hat? Is it possible the hat provides a “batter’s eye”-like effect, making it easier for batters to see the ball out of his hand?

Hansel Robles whiffed Giancarlo Stanton in a big spot. I liked Robles in that spot because he provided an element of mystery. If you go back in the archives here at MetsToday, for perhaps 7 years we’ve been advocating the use of rotating bullpen arms that shuttle back and forth from the minors as a means of being effective by virtue of mystique. I’d love for some stathead to test the theory of batters facing pitchers for the very first time in the pitchers’ careers, and whether there is indeed an advantage for pitchers who are “unknown” / unseen / have incomplete scouting reports. If there’s any credence to the theory, the Mets would do well to tap their minor league pitching depth and constantly overturn bullpen arms with an eye toward limiting exposure.

Ichiro Suzuki is a treasure. Never mind the homerun he backspun into the right-field seats with a perfectly level swing — he’s one of those players at the tail end their careers for whom I drop everything and watch intently. Off the top of my head it’s Ichiro and Chase Utley in that realm, and can’t think of any others who are in that part of their career where I want to make sure I see every at-bat before they leave the game.

Mets head back to home sweet home to face the suddenly slugging Nationals for a four-game weekend set. Game one on Thursday begins at 7:10 PM and pits Jacob deGrom vs. Stephen Strasburg.