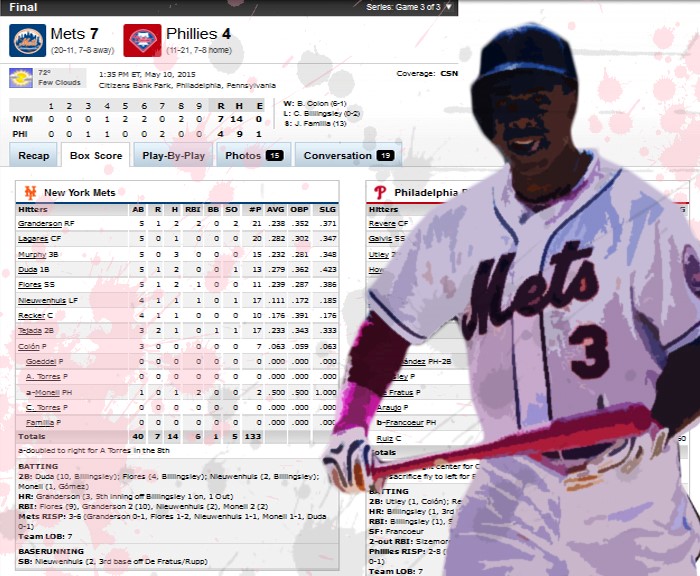 Both the Mets and Phillies looked pretty in pink on Breast Cancer Awareness Day. I think it’s a very cool idea. If there are people out there who haven’t been touched by cancer, you’re darn lucky.

The SNY team also gave us a story about Wilmer Flores’ mum getting on the bus with him to all of his games and it was all rather sweet. Maybe I’m just a sap, but I think this kind of thing from a major organization is valuable.

The game itself was a good one. Given how lousy the Phillies are likely to be this year, they were hardly dominated by the Metsies. The 7-4 scoreline flattered the Mets and guys like Chase Utley will eventually turn things around. Even Ryan Howard is starting to warm up… well, he was until he grounded out to Alex Torres (why swing at a first pitch from Torres?) with the bases loaded in the 7th. And, boy, the appearance of Jeff Francoeur on a roster immediately signals a team is in deep trouble. Mets’ fans should know Jeff’s arm is not enough to cover his shortcomings.

The best aspects of the game came on defense. Just in the 9th alone, Kirk made a nice sliding grab in foul territory, and Ruben Tejada made a cute little flip to first to get Revere by a step. Revere had previously stolen a bloop hit from Curtis Granderson with a dive in the 8th.

I also continue to be impressed Lucas Duda at first base. He made a nice stab on a strikeout that got away, he stretched well throughout the game, and he always gets his body behind the ball. As with Granderson, I know Duda’s not the greatest player in the world but I like watching him play. He’s like a robot gradually assimilating how to play ideal defense. The Dude will get there.

The Grandyman hit another home run, which was the turning point in the game. His slugging percentage is now .371, which is hardly inspiring. And he sorta messed up going back on Utley’s double at the wall.

But, hey, I like Curtis too and it’s fascinating to watch his approach to batting. Firstly, you can see exactly why he pulls the ball. He crouches too low (will he get into Jeff Bagwell territory?) and his head is sometimes leaning over. Wilmer Flores – who got a couple of strong hits – is his polar opposite, standing to attention in the box and swinging from the waist up.

Johnny Monell looks like he’s somewhere in-between those guys, which is a good sign. Johnny from the Bronx crushed a pitch to drive in a couple. He’s got a flat low swing with a slight crouch, and the double raced past Ben Revere.

Two days before we’re treated to Thor, the Incredible Hulk (alter ego: Bartolo Colon) had a standard outing. Colon had 6 strikeouts in 6+ innings but also plenty of meatballs that were taken for eight hard hits… but his pitching numbers this season are staggering.

One walk in seven starts. One walk?

I joked in my first recap that Colon is playing chicken with hitters, repeatedly throwing strikes. Well, he isn’t stopping. He played chicken with famed hitter Chad Billingsley in the third and Chad promptly hit a home run. That’s the sixth off Bartolo this year, the same amount as his wins. Dan Warthen could be replaced by a Dictaphone repeating: “Just throw strikes, kid.” I wish Alex Torres would listen.

The Mets continue to be fun to watch. It’s more than the wins, they’re an interesting mix of characters and personalities. They all have readily apparent flaws but also great points. I like it.

I watched Colon reaching up with his arm between pitches (when’s it going to explode?) and Jeurys Familia is being used almost daily (when is his arm going to fall off?). But let’s not worry about the future. The Nationals are on their anticipated rush (8-2 in the last ten games) and there will be dark times.

But it’s sunny today. Pop a pink hat on… and take care everyone.

Back Mets Promote Noah Syndergaard
Next Which Backstop is on the Hot Seat?