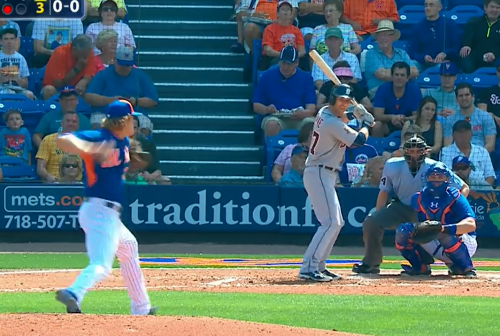 In case you missed it, the Mets made two moves to their pitching staff: Dillon Gee was placed on the DL with a groin strain, and to replace him on the roster and in the starting rotation, the team promoted Noah Syndergaard from AAA Las Vegas.

Pitching for Wally Backman‘s Las Vegas 51s, Syndergaard was 3-0 with a 1.82 ERA (six earned runs/29.2 innings) in five starts, ranking fourth in the Pacific Coast League (PCL) in ERA and fifth in strikeouts with 34. The phenom had a 19-inning scoreless streak going into his most recent start and allowed just two runs while striking out 27 in his last 22.0 innings. PCL opponents were hitting .192 against him, the third-lowest mark in the league and his 0.94 WHIP stands as the fourth-lowest in the league. In addition to his mound exploits, Syndergaard also went 3-for-4 at the plate with a double, a two-run home run, two runs scored and two RBI in his last start at Albuquerque.

There isn’t much more that the youngster could have done to prove himself at AAA, so with Gee going down, it makes sense to see what Syndergaard can do at the big-league level. He’ll make his MLB debut on Tuesday night at Wrigley Field in Chicago against the Cubs. In the meantime, you can follow him on Twitter.

For the record, I’m concerned about a major flaw in Syndergaard’s mechanics, which is illustrated in the photo above — his throwing hand is far behind where it needs to be at foot strike / front foot landing. Syndergaard was put on the DL last year with forearm issues, and experienced more forearm discomfort during spring training. Generally speaking, forearm problems are a precursor to UCL strains and tears. That said, I’ll be curious to see if he’s corrected his flaw since the last time I saw him pitch in March.