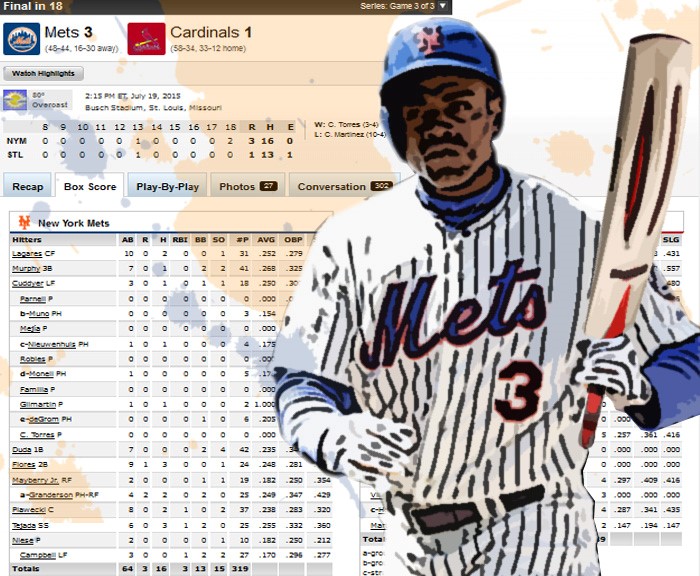 Well, at least now you’ve experienced what it’s like for me to watch or play cricket.

If you don’t know English county or test cricket, it’s a form of mental torture where you watch people foolishly play with a bat and ball for six hours at a time. This is also known as the Mets-Cards game on the 19th July 2015.

Because it’s English, cricket has strange quirks. After the first two hours, you have a forty minute break for lunch. These are usually sandwiches but, if you’re lucky, sometimes you get strawberries and cake. Then, after another two hours, you have a twenty minute break for a cup of tea. I’m not kidding. By this stage, my teammates would know the cola in my bottle was laced with something 40% not-cola. Something to think about in future 7th and 14th innings stretches…

I learned how to maximise my patience playing cricket after spending years watching the game. Cricket, like this offensively inept game between the Mets and Cards, is gruelling if you watch it in the wrong way.

First off, have a book handy. I got through a good fifty pages of a Willy Vlautin novel while half-watching Jon Niese pitch well and Murph and Flores (he’s still so much better at second) turn three double plays on Yadier Molina. For the final one, with a runner on third in the eleventh, Molina even turned on the afterburners and broke into a quick jog.

By this stage the score was still 0-0. Time for a brief snack (some nice quesadillas) and a glass of Polish beer to accompany sudden action in the 13th. A frisky Granderson (he joined the game late… probably had a cup of tea beforehand) doubled and Kevin Plawecki came to the plate. Plawecki had done an impressive job of extending the game earlier. He struck out with the bases loaded in the 6th. He later grounded out with runners of 2nd and 3rd and then – even later! – he grounded out with runners on 1st and 2nd. But he was a hero for a few moments in the 13th, poking a drive past first and second. He later got stranded at third for three outs, but surely the win was already secured…

Luckily, Jeurys Familia didn’t tempt us for too long. On his second pitch, Kolton Wong plopped a fly ball just over Grandy’s head. And so the game grinded well into it fourth hour. I had a shave with headphones on in the 14th and started to wonder about Sean Gilmartin. And not just that he looks a cross between that guy who plays Ant-Man and that guy (sorry, Guy) from Memento.

Gilmartin has done a classy job this year, but one almost completely under the radar. Gilmartin is a Blevins-light, with a similar sweeping curve that garnered four strikeouts in a row, including making Jason Heyward look daft wafting at three low ones in the 14th with Kosma in scoring position. He also struck out Peralta on a great change-up, and Grichuk on three pitches. Impressive.

Gilmartin is proving to be a savvy Rule 5 pick, and when he hangs around for the whole season he’ll give Jerry Blevins some able lefty support. Those Hollywood looks won’t hurt sales either, drawing in bachelorettes who don’t go for Matt Harvey’s rugged New Jersey plumber vibe.

Even with Gilmartin getting his first ML hit in the 16th (a little looper over third base) the game rolled into its fifth hour. Keith and Gary noted the crowd seemed a fraction of the 40,000 at the start. Many had died of natural causes and if you listened hard there were fleets of ambulances caring for those who had slipped into comas. Keith was struggling too, audibly sighing and also annoyed he’d missed his first plane. Welcome to cricket, Keith. Have a strawberry.

Luckily, the Cards blinked (or fell asleep) first. Cards’ pitcher Carlos Martinez fumbled Plawecki’s sac bunt with the wheel in motion, leaving the bases loaded. Ruben Tejeda then hit a deep cover drive for a sac fly and Campbell executed the suicide squeeze to plate Grandy. Ignore that Soup shouldn’t have looked back because it cost him a bunt hit. Given the Mets are now 3 for 62 with runners in scoring position (that’s so far below the Mendoza line they can see little devils with pitchforks) you have to get runs where you can.

Mercifully, Carlos Torres polished off the game with relative ease so we were saved from Alex Torres pitching. Be grateful for small mercies.

This was an important win before the Mets blearily stagger on to face the Nats and their three most important games so far. The Metsies have their three young guns lined up but, after a long sleep, be worried. In cricket, England’s test matches last up to five days. Not only is each day’s play six hours long, but they traditionally lose at the end of all that… usually to Australia. Now guess who has their Embassy in Washington, D.C. If you see anyone called Bruce or Sheila dressed in yellow and green, run. The misery is only just beginning.

Back A Mets-Friendly All-Star Game Recap
Next Do The Mets Really Have The Pieces To Get A Bat?