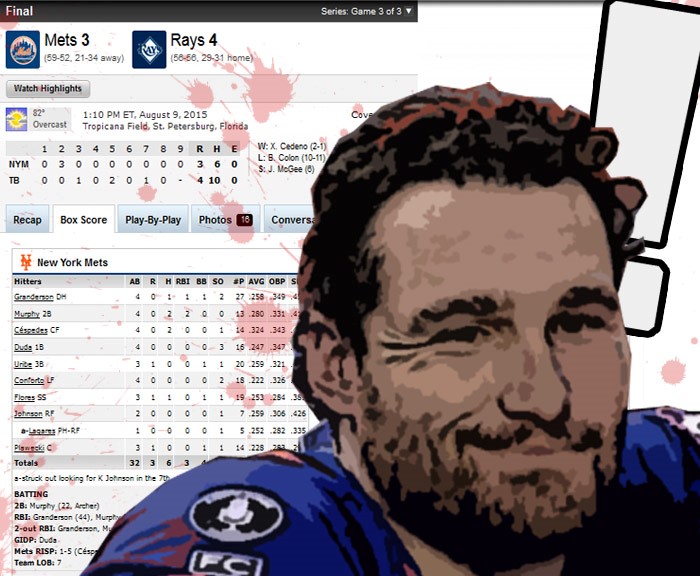 For me, the Rays are like the Nationals. I look at their records and then double-take. How did they end up this way? Just take Logan Forsythe. He looked very much an All-Star at second as he made a nice play up the middle on Daniel Murphy in the fourth. Kudos to the Rays scouts for picking this guy out after four nothing seasons. Kudos for pulling together a whole team on their budget.

The Rays and Nationals look very good to me but their records suggest otherwise. When you follow one team, you miss the details that help you figure out the rest. Who knew Forsythe has a 4+ WAR? For all our grousing about the Mets’ offense, other teams are facing injuries, screw-ups, hopes and dreams fading away. I thought the Pirates would turn it around. They did. But time is running out for these guys. The Rays are basically gone. And the Nats should repeatedly hit their heads against a wall if they lose this division. And yet they could… might… will… lose it? You throw away a 10 K outing from Max Scherzer and you sorta deserve it.

The Rays sent out their best pitcher for this game. Chris Archer looks about 12 but throws – mostly fastballs up and in – with teenage anger. He struck out 10 but also walked 4. If the Mets laid off the high fastballs, you could have flipped that number and the Mets would have won 10-4. Archer pulled a tantrum in the second when the umpire called yet another walk on him. Archer is a “Renaissance Man,” according to Ron and Keith. He reads a book about religion and then one about atheism. You have to be a contrarian to be a Mets fan so I like this guy straight away… but Murph took out some anger of his own by clunking this guy for a couple of RBIs in the second.

Daniel Murphy’s hot streak – he has three of these every year – hasn’t improved his temperament. Please watch his at-bat in the second. After the usual debate with the umpire on a first pitch strike, we then had the usual bunch of foul balls and Murph shouting at himself. Or was it the umpire? Or was it God? I have no clue. He clunked the next pitch between first and second for the RBIs. On first base, he then kept shouting at someone. Who? Someone in the crowd? The dugout? Maybe it’s some expression of joy? Or a warning sign that he needs therapy? Still dunno.

Archer’s own histrionics are even harder for me to judge. It’s the first time I’ve seen a full game from the kid. Ron and Keith said he’s usually quick to deliver his pitches, but he was slow and wild in this game. A bad day, I guess. He sprayed a wild fastball way above Duda’s head in the first. He kept spiking his breaking stuff and he flounced around. Look, if I had hair as good as his, I’d want to take my hat off and shake it around. But it felt like he was doing his best Daniel Murphy impersonation, griping about things to fire himself up. I thought the home plate umpire called a good game… his pitches WERE inside.

Archer ploughed through six LONG innings and ended up not losing the game. Bartolo Colon lasted longer but ended up with the loss. I guess life conspires against us older guys. I’ll spin Bartolo’s platelets myself if it means they’ll continue to be a pitcher in MLB who’s older than me.

The game lolloped along, with the funky stance of John Jaso getting attention and three RBIs. Another kid – he looked about 14 – ended up hitting a go-ahead home run off Colon in the seventh.

Colon’s problem is he’s leaving his pitches too high. Early in the season he was throwing 95% fastballs but could spot them low. In this game, he threw a few more sliders than usual and mixed up his fastball even more. He got an out from Evan Longoria on an 85mph fastball. Is Colon injured? You tell me. His matador routine means he could be missing an arm and still come across as strong. When Steven Matz returns, it seems the Mets will revert to a six man rotation. To save innings for the young guys and all that. But doesn’t the old man deserve a little rest in the bullpen?

After Curtis Granderson grounded into the second base shift in the ninth, the Mets lost. But then so did the Nats. Hmm… NL Least? I’d take it. I don’t care. You win against what it put against you. Put Bryce Harper in a playpen and tell him Murph is joining him. Watch the tears. You never win against crazy.

Over the next few days, I fancy the Mets against the Rockies more than the Nats against the Dodgers. Just make Carlos Gonzalez think that it’s still April or May. Why doesn’t Citi Field have temperature control? Never mind… chuck some spring blossom on the field and the Mets will win.

Back Mets Game 105: Win Over Nationals
Next Avoid The Jinx: How to Keep the Good Vibes Flowing