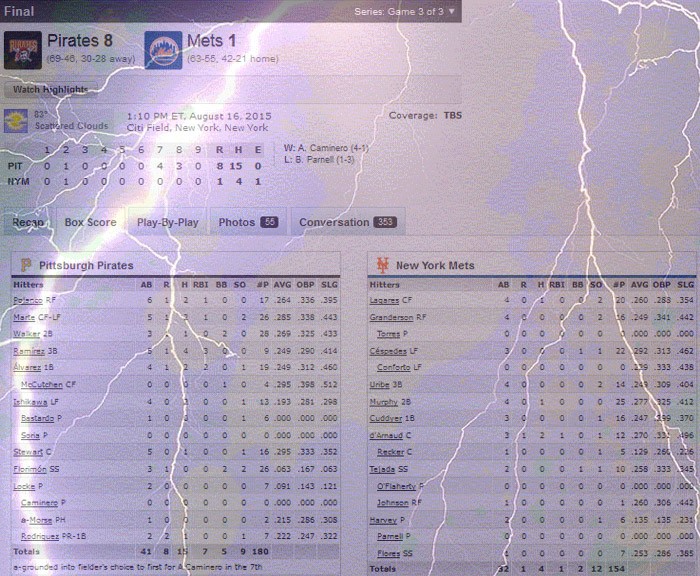 It was all going so well… and I include the first couple of games in the series against the Pirates as part of that. Yeah, the Mets had lost but they were tight extra-innings games against a superb team.

I think the majority of Mets Today fans love pitching and defense and it’s been a treat to watch high quality games. We had Yoenis Cespedes’ laser beam to catch a runner a third. Curtis Granderson running down a long fly in right-center. Jung-ho Kang showing everyone who whined about his glove that he knows what he’s doing with a smooth double play.

Before that, there was a four-game sweep and a Rally Parakeet who’d been lured by the nesting sites in the Colorado Rockies’ bushy beards. Today, with Jonathan Niese on the bench and Matt Harvey sporting his Jason Statham stubble, the Mets were doomed.

The Mets got swept, yeah. But it doesn’t hurt that Citi Field was packed and that the Nationals are imploding at a staggering rate. The NL East standings remain fine and I think the Pirates are the second best team in the NL.

Pedro Alvarez – more Yogi Bear than Yogi Berra – put the Pirates ahead after he smacked a long home run off Matt Harvey in the second. Harvey pitched around trouble through six innings but showed plenty of class. Most innings got to two outs with someone on third and he coaxed an out.

Harvey is pitching to contact and seldom misses way wide. It looks less showy than strikeouts but he’s doing his job. He’s missing up and down, and he’s rarely grooving pitches. His curve was loopy in this game but the slider was on… helped by a generous call (on a pitch off the plate) to get Marte in the fifth. With all the talk about innings count, I think a guy as smart as him knows what he’s doing. Matt Harvey is maturing. It’s easy to think ball-players are full adults but they’re still getting there, and that’s where a manager as strong as Clint Hurdle comes in. Uncle Terry has matured too, like a 1949 Bordeaux. But he used to be a 1949 Port and he can still confound a little.

Take Travis d’Arnaud. He hit a long homer to left in the bottom of the second to even things up. Tell me why d’Arnaud is batting seventh in the order? He’d been on a 0-5 stretch, I suppose, but Juan Uribe is hot with home runs and little else. The likeable Michael Cuddyer is succumbing to rigor mortis and the humanoid Daniel Murphy has a .568 OBP against lefties. Why bat them above d’Arnaud? d’Arnaud hit a double inside third base in the fourth too, so that might get Extra Terrestrial Collins to add another improved crimp to his line-up.

Sunday felt like a usual Mets game with the game tied at 1-1 and then the storm hit. Given how poor his stick as been recently, Cuddy wisely kicked a ball off his toe for a HBP. I thought the boom of thunder was a stunned response to him getting on base. Sadly, it was bigger than that. Clearly a bunch of Mets’ fans had gone against the advice in Cappy’s last article and had called down wrath.

Playoff teams aren’t flawless, and the rare goof by the Mets (Murph) was matched by the Pirates (Ramirez) in the first couple of games. But today’s seventh inning was an abject mess.

I take notes for games I report on and here’s what I got:
– Parnell throwing 97. Overthrowing up and spiking down. Nervous. Recent issues. Spraying walks.
– Botch at second. Extra outs. Murph thought Tejada was somewhere in center field. Passed ball.
– Cespedes flings throw way left past home plate. Walker tries to score and gets caught. Messy.
– O’Flaherty can’t pitch any more. Almost same surname as an ex-girlfriend. Curse him.
– Lousy inning all around in what had been a great series.

There are worries with the Mets. They limped out with six of the last eight batters striking out. The Mets continue to struggle against anything slow and away, so it’s lucky Greg Maddux has retired.

As Terry Collins stormed to the clubhouse after the final out, there must have been new holes being ripped. But, and I really will make this my last criticism about DM, will he rip into his adopted son?

Question: Was Daniel Murphy’s throw to third on Saturday and throw to second on Sunday:
a. Over-enthusiastic?
b. Misplayed by someone else?
c. Stupid?

Answer:
a. General thoughts on SNY’s commentary
b. Terry Collins
c. The truth

It’s no embarrassment to lose to the Pirates. The Orioles are solid but that series should be a 1-1 split and then the Mets will be back on Easy Street against the Rockies and the soon-to-be-Utley-less Phillies.

Getting over the hump of the games in July was key for the Mets. They made it but the Nationals aren’t. Put that in your tobacco and chew it, Bryce (sorry again, Cappy, I won’t do that again).

Back Avoid The Jinx: How to Keep the Good Vibes Flowing
Next Mets Game 123: Win Over Rockies