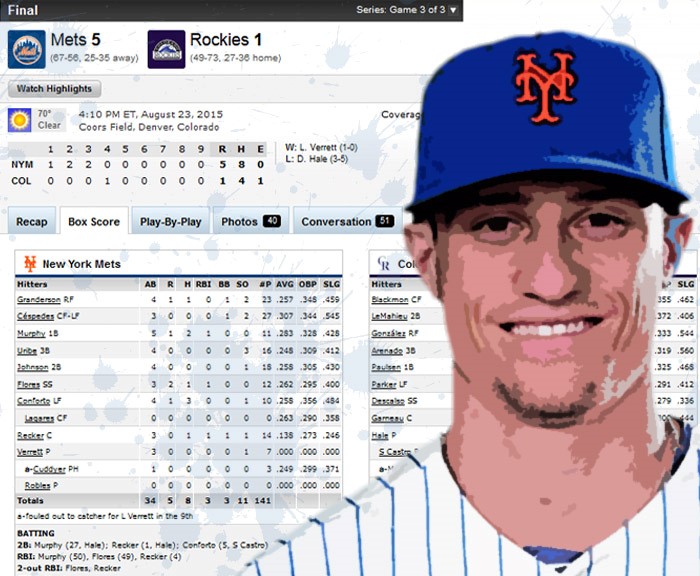 Beating the Rockies is easy, huh?

The Mets have just swept them 7-0 in the season’s series, but here are a coupla fun facts about the Rockies. They went 3-3 against the Nationals. They’re also 7-5 against the Giants. It’s time to update our Christmas card list to include 25 folks in Colorado.

The Rockies are SO bad against that the Mets’ 33 runs in this series would be a great return in a normal week. (Between you and me, I sabotaged their humidor… I got Ant-Man to crawl into it)

The mood of the Rockies team is summed up by Jose Reyes having a dig at them in the media, along with Carlos Gonzalez dropping his bat with disdain after he hit his deep fly. Knowing you’ve only closed the game to a 5-1 deficit has got to take the sting out of hitting a 430 foot homer.

The Rockies have lousy pitching and make daft mistakes. Charlie Blackmon’s baserunning in the 6th was flat-out comedic as he did a Murphy by getting caught going from first to third with two outs and that 5-1 deficit. Michael Conforto made the play with ease. And you could too.

The curious thing is the Rockies do have very good players. Carlos Gonzalez is in full CarGo mode after the All Star Break. Nolan Arenado has 30 homers and robbed Juan Uribe of a double down the line with a slick play that he always makes look easy. DJ LeMahieu flashed his own Gold Glove when he dived to get Johnson’s hard grounder way to his right.

And yet, and yet, and yet… you don’t become 49-73 without being terrible at a lot of things. Jose must have fumed from the dugout, but at least he’s got next year’s $20m salary to cheer him up. The Rockies are bad… yet it’s still nice that the Mets are better.

Dustin Garneau – a catcher whose name rhymes with Travis d’Arnaud but is less of a starlet – conspired to let through 4 wild pitches from David Hale. I’ll defer to Joe on this as a catcher, but Garneau seemed leaden-footed to me.

I do know a little about pitching and it was fun to watch Logan Verrett for an almost complete game. Verrett’s fastball rides about 89-91 mph and doesn’t do much. It pops occasionally but it only showed some duck and dive when he got Paulsen in the seventh. It’s standard, slightly below average in the major leagues.

Verrett’s usual change is only about 5-6mph less than his fastball and looks lazy. It’s fine and got some pop-outs and fly balls, but it’ll get smacked in future. His even worse pitch is his slider that doesn’t really slide. It’s a nothing pitch… there isn’t enough difference from his other pitches to surprise hitters.

So how the heck did Logan Verrett get through 8 innings giving up 1 run in the high altitude hitting heaven of Corrs Field? Those sharp cheekbones and muscle twitches can only carry him so far.

I’ll say this loudly. Logan Verrett NEEDS to be strapped down and told – a la THE CLOCKWORK ORANGE – that he MUST throw his 79-80mph pitch WAY more. It’s flat-out nasty and dives straight down just in front of the plate. I lost count of the grounders and the strikeouts it caused.

I spent most of this game trying to watch his hand, but I needed a better angle to figure it out. Playing cricket, I had to figure out hand positions and constantly watched the bowler’s hand in the field and at bat. Also as a bowler and with one lousy seam to work with, you HAVE to know what the ball can do. People don’t shine one side of a cricket ball for kinky pleasure, alright?

I think – and I emphasise THINK – Verrett’s slower change is a “Fosh.” It COULD be a forkball but I couldn’t see him flicking his wrist. It MAY be a circle change but it didn’t move like it and I couldn’t see the trademark circle grip. Sound back in the comments if you’ve got a view on this.

Verrett’s slow change – and let’s say it’s a Fosh – is a plus-plus pitch. If he can keep throwing it this well he can get away with his average other repertoire. As Matt Harvey fill-ins go, I’ll sacrifice my precious Fantasy Baseball points for such an economical and fine outing from a Mets’ pitcher.

The Mets rumble onto to the Phillies next. Don’t let the Phillies’ post-All Star Break run deceive you. They’re still bad. The NL Least is a gift that keeps on giving, and it’ll be fun to see David Wright back.

Hit me back about Verrett’s pitch. That was a “Fosh” wasn’t it? It’s driving me crazy, but if he keeps throwing it he’ll be a valuable addition in October… Phew, October? I used to be able to get to bed before 4am then.

Back Mets Game 118: Loss To Pirates
Next Mets Game 127: Worth Staying Up For