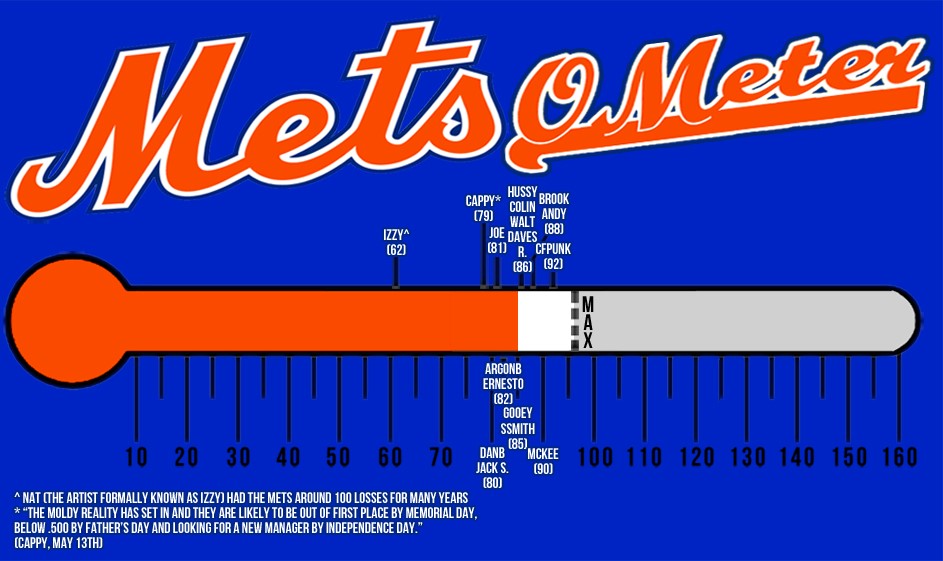 This lazy game went south after the Braves scored four against Logan Verrett in the fifth. Verrett pitched well enough but sank after being struck for two home runs. The second followed an intentional walk to the “big threat” of Nick Markakis. Coincidentally Markakis has had two homers ALL YEAR. Hey ho, Uncle T.

Tyler Clippard continued his worrying recent troubles by giving up another couple of runs in the ninth. Clippard will be fine, and it wasn’t a lousy pitch. His change-up still looks decent and that will be his go-to pitch in the offseason.

Offensively, David Wright drove a homer to right center and continues to get on base. He’s a perfectly fine number 2 hitter. Meanwhile, Daniel Murphy had a couple of doubles but I don’t think he’s the answer in the three-hole. The Mets have been laboring to score runs for a week or so. You have to hope the pressure of being so close to the offseason isn’t getting to them.

Hmm… I still think they’ll be fine this year. Out of the remaining games only 3 are against a MLB team. My guess is they’ll go 5-6… and that’ll be comfortably enough to win the NL East.

Of more pressing concern in the Mets line-up for the series with the Dodgers. With a killer righty in Zack Greinke and a killer lefty in Clayton Kershaw coming up, the Mets will need to get their batting order aligned correctly.

Here are my ideal line-ups. Yep, I know Terry won’t follow what I think. For one thing, his favourite son is missing. But feel free to list your own line-ups in the comments section. If we bribe Uncle Terry with enough Werther’s Originals maybe he’ll listen.

The big choice here was dumping Daniel Murphy to the bench. Think positively. He’ll LOVE striding out with the game on the line and seeing how many 3-2 balls he can foul away.

Murph could fit at both second or first… if you have more faith in him than I do. Lucas Duda continues to look out of sync – yet another loopy fly to left tonight – but I like his defense more. And when The Dude hits a ball it stays hit.

Will Duda revel in the pressure of the offseason lights? I hope we’ll find out. Murphy has a much-vaunted “clutch” status, partly because he freezes so long after getting a hit that it’s hard to forget it. He’s taken this approach further on the basepaths, staring like a rabbit in the headlights to watch a botched double play before getting thrown out last night. I preferred Murphy’s startled sheep tactic.

Yes, Murph has got a good record with runners in scoring position this year. But his clutch defense ain’t so great. Kelly Johnson is just as good a hitter as Murph with runners in scoring position, Johnson has a little more power, Johnson’s defense is better (it’s not great, but it’s not hard to overtake Murph) and Johnson also doesn’t suffer brain farts. I’m plumping for Johnson to go big, much as it would offend Murph.

The Mets have tried Lagares out of the leadoff spot before and it does make sense. The problem is that Lagares has struggled in 2015 but – much as it pains me – he’s still a better option than Grandy. Granderson’s corkscrew stance and off-kilter head angle make it incredibly hard to hit lefties. Let’s take a punt with Lagares and pop Corforto in left. At least Conforto’s ability to hit the other way might get more success, and his surprisingly strong defense doesn’t hurt.

I doubt Uncle Terry will take this option, of course. Curtis Granderson has done a fantastic, mature job out of the leadoff role this year… but he’s TERRIBLE against lefties. Terry, please save the Grandyman for later. Think it through and just get him straight back in the game as soon as the LHP starter retires to his ice wrap.

Once again, there’s no Murph. But I have my reasons. Uribe’s uppercut swing has become almost comical, but he’s had plenty of extra base hits and he’s a WAY better second baseman than Murph. Predestination means Murph will sock a key home run coming off the bench anyway.

Cruddy over Duda at first is just the lesser of two evils right now. And you can sub in Duda along with Grandy when the relief pitchers kick in. I’m baffled both Duda and Grandy don’t open their stance more against lefties to counteract the change in angle. Have a chat with Keith, guys.

11 games to go. I hope the Mets don’t limp over the line, but a one-legged hop is fine if that’s what it takes. The innings limits, the bone bruises, and the memories of past failures just make me want the regular season to end. Then, hopefully, the fun will begin again.

Back Mets Game 143: Win Over Braves
Next Sustainable Success or a Blip on the Radar?