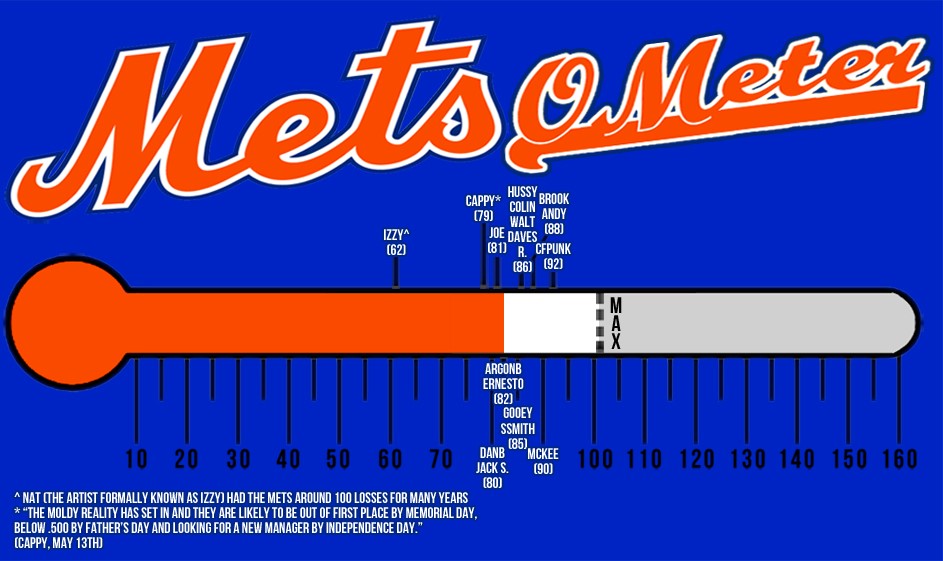 It’s possible to get to the stage where you forget how to lose. Somehow that drags you along, as unlikely as it all seems. Donald Trump is making a damn good fist of the same idea.

The Mets’ surge – and yet another comeback win on the road – has rescued their away record to 37-37. How unlikely was that six weeks ago? Thank goodness the Mets instituted the MetsMobile idea I offered up way back in my report on Game 77. Whether the Mets wrestle home field advantage from the Dodgers or not, the MetsMobile will guarantee the sounds and tastes and smells of good ol’ Citi Field. Couple that with the help of Caesar, sorry Cespedes, they’ll be fine.

Now the Mets are 82-61, CFPunk is looking like a genius and the Mets-o-Meter is overtaking more and more folks. Cappy, Dan B, Jack S and Joe are now officially out of it. Argonbunnies and Ernesto are next up. You’d be hard pressed to find a more logical and informed group of baseball fans. But this has been an illogical season and the baffling Mets’ comebacks keep on coming. For my bank account, just please stop at 88. I’m poor, ok?

Today’s game was a drab Sunday afternoon affair with bloop hits, a secondary Mets line-up and lazy defense. Even Curtis Granderson’s shades couldn’t help him from losing a pop-up in the sun. Scored a hit (!!!) it put the Double AAtlanta Braves up 7-4 in the eighth. I guess I’d score it a hit too if Grandy gave me a signed photo. I’m easily bribed. Like I said, I’m just poor… I’m not Pete Rose.

These Braves are adept at losing games and they somehow manufactured another one here. With 2 outs in the ninth, Juan Lagares was on base with a “double” to rightish-center that was only a little less of an error than Grandy’s gaff. Grandy atoned by taking yet another walk to put two on base. I’ll save gushing about how great he’s been hitting leadoff for another post.

Up stepped Daring Daniel Murphy and he plunked a home run off a 0-1 pitch to deep right center. Cue exploding high fives to everyone he could find, complete with sounds effects from Murph.

The Braves continued to implode with walks in the top of the 10th and the lousy game was mercifully over. The sighs of relief in the SNY box were audible.

The Nats have done their own imploding for a while, despite their 5-zip win today against the MiAAmi Marlins, so it’s time to talk about the playoffs. This week, let’s look at the Mets’ starting pitching.

Jonathon Niese has been struggling recently and he didn’t look great today against a team of little leaguers fortified by Andrelton Simmons and Freddie Freeman. Niese’s curve is just looping in, usually in the centre and not low enough. Niese’s fastball (and it’s a bit of stretch to call it that) isn’t cutting as much as when he’s at his best. His WHIP is now 1.41.

I like Niese but I don’t know where he fits on the postseason roster. It’s been made public that the Mets don’t like Niese out of the bullpen. I prefer Sean Gilmartin in the long-man leftie role anyway.

You HAVE to take Bartolo into the playoffs. Not only will he happily distribute candy to the team, but Colon will always throw strikes in a relief role, and – despite his terrible record against good teams – he could spot start in a jam (eg. Harvey’s ligaments fall off) and not let the occasion get to him. Hitters tighten up in the playoffs and Bartolo’s steady stream of strikes will get a bunch of pop-ups. Niese’s reputation is that the big games get to him. Hmm… I’d take Colon’s matador spirit and the young guns over that.

My current playoff rotation is DeGrom – Syndergaard – Harvey – Matz. Is Matz too young for the role? I dunno… you tell me. I just feel Matz is a better bet than Niese, much as Jonathon has been a dutiful servant through the horrible years.

Shoot with your thoughts below. Next week we’ll look at the lineup. Then in a fortnight we’ll tackle the most difficult issue… figuring out the best bullpen for the Mets to continue this wonderful, stupid, amazin’, crazy, fun run.