A RH Hitter To Consider 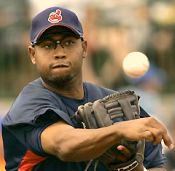 It would be a risky gamble, but it could pay off — big time.

Only two years ago, Andy Marte was one of, if not THE, top prospect in all of baseball. The Braves shipped him to the Red Sox for All-Star shortstop Edgar Renteria, and the Bosox flipped him to the Indians (along with Kelly Shoppach and Guillermo Mota) for Coco Crisp, David Riske, and Josh Bard.

However, he has struggled at advanced levels, batting only in the .260s in AAA and barely above the Mendoza Line in the bigs. The Indians have to keep him on the 25-man roster when spring training breaks, or place him on waivers because he is out of options.

To make matters worse for Cleveland, Marte came into camp out of shape and has been struggling. There is a very good chance that he will not truly earn a spot on the big league roster by the end of March. He might be carried regardless, because if he isn’t, he’ll be seen as a flop.

A few things intrigue me about Marte. First, he was considered a better prospect than Lastings Milledge a year ago. Second, he’s only 24 and therefore has time to turn around — maybe moving him to AAA as a 21-year-old was too soon. Third, the Tribe has been working him out at both first base and the outfield in an effort to make him more valuable off the bench. My, my … couldn’t the Mets use a righthanded-hitting first baseman / outfielder?

It’s possible that Marte will never live up to the extraordinary expectations thrown his way a few years ago — it wouldn’t be the first time a “can’t-miss” prospect missed. But the Indians have their hands tied with him, and really don’t have a place for him on the ML roster. In contrast, the Mets need a player exactly like Marte — both right now and next year. If Marte can get back on track, he could be the ideal “heir apparent” to the first base job that Carlos Delgado will be leaving behind after this season.

This from Dayton Moore, in a quote from Baseball America in 2006:

“Andy profiles as a guy who has the ability to hit in the middle of the lineup of a championship major league team. He has all the ingredients to be a special hitter.”

Marte’s dropoff is due to a mechanical flaw — whereas he used to have a solid, level, line-drive swing, he fell into the bad habit of dropping his shoulder and pulling off pitches after joining the Indians organization. He used to do things “correctly”, so in my mind he can be fixed. I haven’t seen him this spring, so have no idea if he’s already on his way to better mechanics.

The risk, of course, is that Marte may never find his “old” swing, could indeed be a flop, and would have to be kept on the 25-man roster all year. For a team planning to go to the postseason, they have to have all 25 man contributing. Tough call, but if Marte pans out, the Mets could have a circa 1986 Kevin Mitchell type of player, who can come off the bench in 2008 and take over a starting position in the lineup for many years to come. And considering the Tribe’s tough circumstances, the cost could be relatively low.

Back Say Goodbye to the Kids
Next Don’t Blame Willie