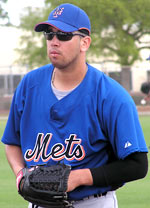 The boxscore lies, so don’t worry too much about the 5 runs and 4 homers that Oliver Perez gave up in 5 innings of work. The key was that Ollie’s mechanics were extremely consistent — perhaps more consistent than I’ve ever seen him (I watched the game on MLB.com). The homeruns were given up on meatballs over the center of the plate, chest-high, except for one by Ben Francisco which was an impressive golf shot.

If there was anything to be concerned about, it was Ollie’s velocity, which seemed a little less than normal on his fastball. The TV radar gun said he was topping out around 87-88; normally I’d guess it was a bit slow, but it had Cliff Lee hitting 90-91, which I believe is accurate. On the other hand, Perez was mixing speeds very well, throwing his offspeed breaking pitches anywhere from 71 MPH to 84.

Again, the key was Ollie’s consistent mechanics. My guess is that he was concentrating more on repeating his delivery and finishing with a balanced follow-through, and less on location. When counts reached 3 balls, he was going for the middle of the plate, which resulted in getting hit hard (and over the fence). Concentrating on mechanics, rather than cutting loose without thought, also would explain the slight drop in velocity. No concerns from my point of view — sometimes you have to take two steps back to take one step forward, and now is a good time to be working on issues that will make Ollie a better pitcher come April.

Meantime, if Cliff Lee was auditioning for the Mets, he did a wonderful job of impressing Omar Minaya. His straight overhand delivery propelled a good changeup and running cutter that kept the Mets off-balance, though he didn’t throw too many of his big overhand curves. Based on how he looked on Saturday, he’d be a fabulous fifth starter for the Mets — whether the Indians are interested in trading him, however, is another story.

Ruben Gotay had one at-bat, from the right side, and struck out. Damion Easley played shortstop for some of the game, slid over to third for a few innings, and went 2-for-3. Fernando Tatis played 3B for part of the game, then was moved into left field. He may have a legitimate shot of making the 25-man roster, as his bat speed looks decent and he can play just about anywhere on the field. Brian Schneider caught half the game and made a great throw to nail Jamey Carroll attempting to steal.

Back What’s the Deal with Indians?
Next Players Available