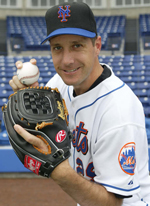 Al Gore may have a contract out on Steve Trachsel, as Trax may be partially responsible for global warming (if there is such a thing).

Apparently, Japanese baseball is changing the rules to speed up the game, in an effort to make the game more eco-friendly.

Hats off to Home Run Derby, who in response have identified Steve “The Human Rain Delay” Trachsel as public enemy number one.

Back Pessimism in Port St. Lucie
Next Gomez Up, Humber Down