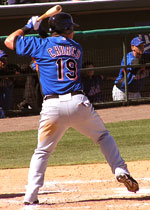 Back Top Hitter in a Pinch
Next Last-Minute Pickups