He Told You So 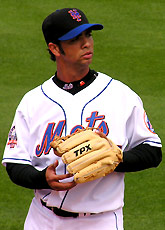 It looks like Pedro Martinez may be placed on the 15-day DL any minute now, though it may not be as bad as we feared.

So now we’ll assume the Mets will promote Nelson Figueroa to fill the fifth starter role — which is fine with me.

At this time I feel it absolutely necessary to regurgitate a sentence written by me at the start of spring training (I thought was kind of witty at the time):

“No one has any idea why Cazavos, Figueroa, and Field are in camp, but I suspect they really weren’t invited but rather were inspired by the movie Wedding Crashers.”

Well, MetsToday reader hdarvick — who I suspect could possibly be Nelson Figueroa himself — set my a$$ straight with this retort:

NELSON FIGUEROA, drafted by the Mets out of Brandeis University in 1995, was invited because he pitched 10 complete games for Chihuahua, 8-6, 3.87 ERA, (24.5 games out of first) in the 2007 Mexican Triple A League, then went to Taiwan where he went 4-0 and then won games 1, 4, and 7 in the 2007 China World Series in October and was voted MVP. He pitched the only game Taiwan won in the 4-game Konami Cup Asia Series in the Tokyo Dome in November. In the Dominican Winter League, he won two games in the playoffs, including the championship game for Aguilas Cibaenas on January 25, 2008, compiling a 4-0 record in the series (4 starts) with a 1.45 ERA, 31 innings pitched, 24 hits, 33 strikeouts, 7 walks. 1.00 WHIP. He pitched the only complete game in the Dominican “Round-Robin” championship series. He had to pitch for Yaquis of Mexico in the Caribe World Series earlier this month (February 2008), not for Aguilas, because he had pitched in the regular season for Mexico. His record was 1-0, 11 innings pitched (9.1 in one game, 1.2 in relief in the other), 0.83 ERA, and was voted the Caribe Series MVP over players like Miguel Tejada, Tony Pena Jr. and Nelson Cruz. THAT’S WHY HE WAS INVITED and why he’ll be at Shea in 2008.

Kudos to hdarvick — whoever you are — for your foresight. I am happy to eat a large piece of humble pie, while rooting for Figgy to finally make his mark in the Majors.

Back Pedro Panic
Next Mets Game 3: Win Over Marlins