Where Is Ricardo Rincon? 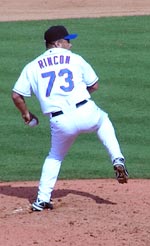 During spring training, non-roster invitee Ricardo Rincon looked like he might make Scott Schoeneweis expendable, seeming to have recaptured the form that made him one of baseball’s elite lefthanded middle relievers and a favorite of Billy Beane in the early part of this decade. Injuries had affected his performance in recent years, but this spring Rincon was finally healthy, showing good command and a sinking fastball that occasionally touched 90-91 MPH.

However, the Mets didn’t have room for him in their overstocked bullpen, and he was reassigned.

But where did he go?

He’s not with the New Orleans Zephyrs, nor in Port St. Lucie, nor anywhere else within the Mets organization … yet, believe it or not, he is pitching professionally, and is technically still Mets property.

Turns out, Ricardo Rincon was “loaned” to the Diablos Rojos (Red Devils, for those of you who failed Spanish 101) of the Mexican League, and could return to the Mets at some point if necessary. Rincon had planned to retire if he didn’t make the team, but his spring performance was encouraging to the Mets brass, and the arrangement allows Ricardo to pitch in his native land, near his home (kind of like Roger Clemens, minus the Hummer).

I haven’t been able to track down an “official” statement regarding this arrangement, but I did find Ricardo Rincon’s 2008 stats and he is indeed on the Diablos roster. Thus far he has pitched in 5 games totaling 5 innings, striking out 5, walking none, allowing 3 hits and no runs.

Yes, The Show looks OK right now, but it’s early, and it doesn’t hurt to have a LOOGY like Ricardo Rincon in your back pocket … even if your pants are in Mexico.