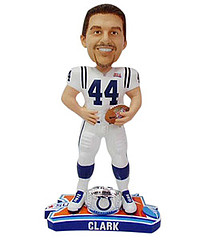 Last night during the SNY broadcast we were told the story of Indianapolis Colt star Dallas Clark, an unlikely Mets fan.

It was kind of weird to see Clark wearing a David Wright jersey, partially because you just don’t do that in Wrigley Field and mostly because I don’t expect an NFL star to be that big of a fan of an MLB player. I know superstars are people too, and therefore it’s normal for them to be fans of other sports, but something just doesn’t seem right about a well-known professional athlete wearing another pro athlete’s name on his back.

But more legitimately unusual is that Clark, who grew up in Iowa, is a diehard Mets fan. How does such a thing happen in the middle of a cornfield? You’d expect him to be a fan of the Cubs, or the Reds, or possibly the Braves since Ted Turner’s SuperStation used to broadcast them all over the country and promoted them as “America’s Team”.

Which got me to thinking (that’s a lie, it got my wife to thinking) — how many other “unlikely” Mets fans are out there?

I know people such as Ben Stiller, Matt Dillon, Matthew Broderick, and Tim Robbins (among others) are supposedly Mets fans, but they were all born in or around NYC, so it’s not so unlikely. Hilary Swank though — another one from the cornfields (Nebraska) — is supposedly a Mets fan.

Another seemingly “unlikely” Mets fan is slide guitarist George Thorogood; from his biography on Musician’s Guide:

Early in his musical career, Thorogood would take time off for the baseball season, even when he was in the middle of recording an album. For decades, Thorogood’s favorite baseball team was the New York Mets. “I’ve always been a New York Mets fan,” Thorogood told Sport magazine. “They crawled their way to mediocrity, and that was me. It was a team I could relate to.”

Of course, Alex Rodriguez is a Mets fan — strange for someone who plays for the Yankees.

We know Chipper Jones is a Shea Stadium fan — he named his kid after the park, after all — but that doesn’t qualify him as a Mets fan.

And then there’s the unlikely fact that the wife of MetsBlog creator Matt Cerrone is NOT a Mets fan, but (gasp!) a Yankee fan!

Any other unlikely Mets fans out there? Post them below.

Back Say No to Frank Thomas
Next Mets Game 18: Loss to Cubs