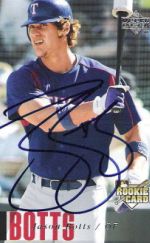 As was pointed out by loyal MetsToday readers Micalpalyn and DaveVW, Jason Botts has been DFA’d by the Texas Rangers.

The switch-hitting slugger has been a low-risk, high-reward, under-the-radar target here at MetsToday since about 1949. OK, maybe not that long, but it sure feels that way. Now it appears he’s there for the taking, available for a scrub A-ball non-prospect.

For those who haven’t been following, Jason Botts is the poor man’s version of Adam Dunn. He’s 27 years old, stands 6’5″, weighs 250 lbs., can play both first base and left field adequately. He hasn’t yet made his mark in the big leagues, but has a career OBP of .390 in the minors and began to mature as a power hitter in the last three years. He strikes out a lot, but puts the ball over the fence fairly frequently and will also take a walk. There’s no guarantee he’ll be a success in MLB but he has proven all he can prove at AAA and will now come cheaply.

He’s out of options, and the Rangers kept him on their 25-man roster to start the season after batting .313 in spring training and beating out fellow out-of-options slugger Nelson Cruz for the last spot on the team. However, after the first month of the season, Botts is batting only .158 with 18 strikeouts and two homeruns in 38 at-bats.

With Moises Alou supposedly returning by the weekend, perhaps now is not the time for the Mets to chase after an enigma such as Botts. After all, to make room for Alou, the Mets will have to demote someone — most likely catcher Gustavo Molina. The next most likely to be demoted position player is Angel Pagan, and as much as I salivate over the possibility of putting the orange and blue onto a horse like Botts, I’m not convinced he’d be more valuable than Pagan at this point in time. Though, Pagan has cooled off, and he is essentially redundant when you consider that Endy Chavez is on the roster. Further, Pagan has options. If by chance the Mets can grab Botts for next to nothing, it might be worth the gamble, as there are ZERO MLB-ready homerun hitters in the Mets’ farm system.

Most likely, Botts would be a bust — though an inexpensive one. But, there’s that tiny chance of catching lightning in a bottle — as the Tampa Bay Rays did with Carlos Pena last year, the Padres did with Adrian Gonzalez, and the Indians did with Travis Hafner prior to the 2003 season. And guess what? All three of Pena, Gonzalez, and Hafner were originally Rangers’ property. Huh.

To refresh everyone’s memory, here are previous mentions of Botts on this site:

Three Guys to Get Right Now

Back Mets Game 24: Win Over Pirates
Next News from M*A*S*H Unit