Jim Rice Has a Blog 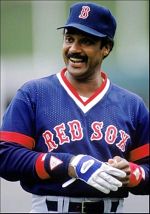 If you hadn’t heard, former Red Sox slugger Jim Rice has a blog. I apologize for being a little late on this — but it’s not my habit to be trolling the Boston Red Sox blog network. Hat tip to my good friend Jon B., who lives in Boston and is a lifetime dirt dog.

So why should you as a Mets fan care that an old Bosox player from a hundred years ago is blogging? Because Rice is writing some really interesting stuff — including a lot of “inside” stuff about what it was like to play MLB back in the 1970s and 1980s. For “oldsters” like me, who grew up watching what may go down as the golden era of baseball, finding out what was happening behind the scenes is during those years is both fascinating and nostalgic.

For example, in a recent post, Rice talks about Broken Bats and Strength Training, explaining that back in the day, power hitters were not necessarily muscular and did not lift weights — and rarely landed on the disabled list. Further, Rice said that he never lifted weights, and his strength was “hereditary” and “I built strength just by playing a lot of sports.” He also goes on to describe a typical pregame “training” routine. For anyone who remembers seeing Jim Rice play, it’s hard to believe he didn’t lift weights — the guy was an absolute rock, and back then was one of biggest and strongest guys in MLB (today he’d be an average-sized second baseman).

In addition to harking back to the good ol’ days, Rice also comments on current topics. After Manny Ramirez claimed to be the greatest leftfielder ever to play at Fenway Park, Rice responded with:

Actually, you like to see this type of attitude in a player, because to be a successful professional athlete, you have to be confident in your abilities. Itâ€™s this type of attitude that leads to the success that Manny has had in the game of baseball. … I do disagree with him though. Manny is a great hitter (one of the best of his era) but it is unfair to compare him to Me or Yaz or Williams because we all played in different eras.

Hopefully, Jim Rice will keep his blog going for a while, because he’s providing great insight to the mind of a superstar. And maybe Rice’s efforts will entice Keith Hernandez to start one of his own blogs. Hey Keith, whenever you’re ready, drop me a line and I’ll set you up!

Back Mets Game 37: Win Over Nationals
Next LoDuca Sounds Off