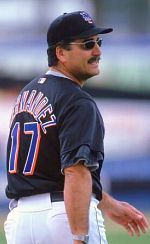 In case you missed it, WFAN’s Mike Francesa asked Keith Hernandez if he would consider managing the Mets. To the surprise of many, Keith answered “yes”.

Hat tip to Mark Healey of Gotham Baseball, since I wasn’t listening to the M&M boys.

Strange answer by Keith, for several reasons. First of all, who ever would have believed that Keith would want a full-time job? As my wife astutely pointed out to me recently, Keith’s life is close to perfect: he gets paid to watch baseball games, he only works a few times a week, he can say whatever he wants, there’s no pressure, no one’s criticizing his work, and everyone loves him. The toughest parts of his job are the commute from Sag Harbor and pulling the wrapper off his Tootsie Roll pop.

Also unusual that Keith would answer in the affirmative, knowing full well that the media would jump all over the quote, and cause more of a circus in the Mets’ clubhouse. The last thing the Mets need right now is more controversy, and the last thing Willie Randolph needs are people publicly jumping in his grave.

It’s also disrespecting to Randolph, and establishes a wedge between Keith and Willie — generally, it’s not a good idea for a TV personality to create tension between himself and the manager of the team he’s covering.

Instead of giving Francesa an answer, he could have simply stated something professional such as, “I don’t comment on jobs unless they’re vacant.”

But, Keith is Keith, and has always been a straight shooter. I didn’t hear the radio program, but from what I gather, he didn’t actually appear on the show — Francesa stated something to the effect of, “well I asked Keith if he would take the job and he said ‘yes’.” So perhaps Hernandez assumed that particular conversation was “off the record” — and thereby has the opportunity to deny or retract the statement.

Let’s say, however, that Keith would take the job … do the Mets want to offer it?

I’m not seeing it, mainly because Keith has zero experience as a manager, and in fact has never been a coach. As much as I like Keith’s old school approach to the game and his take-charge personality, I’d hope the Mets would first consider people who are putting in their time and have some kind of experience — i.e., Ken Oberkfell, Gary Carter, Howard Johnson, Tim Teufel. It’s fairly rare for a broadcaster with no previous coaching nor managing experience to jump in the dugout … the only one I can think of is Jerry Coleman, who left the booth to manage the Padres in 1980. The Padres were “stinkowski” back then, however, with on-field highlights relegated to the San Diego Chicken; Coleman’s hiring was more a publicity stunt than an attempt to improve the team.

If anyone is going to go from TV personality to Mets dugout, it will be Lee Mazzilli, who I think was unfairly fired as manager of the Orioles. Maz was highly respected by the Yankee players and staff when he served as bench coach there, and made the most of a no-win situation in Baltimore. The only issue — if you can call it an issue — is that Mazzilli’s background could be too similar to Willie’s to appease the fans. In other words, like Willie Randolph, Mazzilli was trained under the guidance of Joe Torre in the Bronx.

Back Leaderless Mets
Next Where Is Pascucci?