I Smell a Trade 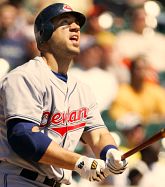 Despite the fact that Willie Randolph is required to report to the principal’s office upon his return to New York, I don’t believe he’ll be fired (yet).

However, as Matt Cerrone at MetsBlog suggests, a change MUST be made.

Again, I don’t think Willie will be fired just yet, though he will get a stern talking-to about various issues from the past week. Although, if MLB were like any other industry, Randolph would be updating his resume right about now.

Because they won’t fire the manager, the Mets will have to do something else. Maybe Nick Evans is the big change — similar to when David Wright was promoted in 2004. Evans’ three doubles and stellar play in left field were certainly impressive, but can he keep it up? Will he get the chance? If the answer to those questions are both “yes”, then Evans could be a spark. If nothing else, he has the opportunity to motivate Carlos Delgado.

But, if Evans is not the wrinkle, then I think a trade will be made. Yes, it’s early in the season, and trades rarely happen before July, but Indians GM Mark Shapiro is on the horn looking to wheel and deal. Not many teams other than the Indians and Mets are desperate for change right now, and we know Omar Minaya and Shapiro had a nice chat during spring training.

With a team average of .231, the Injuns are looking to upgrade their offense. Slugger Travis Hafner is batting under .220 … maybe they’d be crazy enough to deal him for Carlos Delgado. Don’t laugh, the deal could make sense for Cleveland. Hafner’s batting average dropped 40 points last year, and also lost 200 points in slugging percentage. He’s signed through 2012, and owed $57M over that span. If Shapiro thinks Hafner is in rapid decline, it would be very smart to deal him now for Delgado, who might provide similar production but can be cut loose at the end of this season.

The way Aaron Heilman has been pitching lately, I’d guess he’d be one of the first guys to go (sadly, considering my man-crush). If a bat like Hafner’s can come our way, I won’t be too upset to include Aaron in such a deal. More likely, though, is seeing Aaron dealt away for Jensen Lewis, who had a strong 2007 but came into spring training this year with a 6-7 MPH drop in his velocity. If not Lewis, I’d be thrilled to get 25-year-old lefty Jeremy Sowers, who has been a disappointment since going 7-4 with a 3.57 ERA as a 23-year-old in 2006. But please, don’t trade Heilman for garbage such as recently DFA’d Craig Breslow or Jorge Julio.

The more I think about the Hafner possibility, the more I like it. I may be out of mind, but there’s definitely some logic behind it — IF the Indians believe his skills are eroding at age 31, and wondering if regular PEDs testing has something to do with it (oops, did I write that out loud?). Would the Mets want to take on almost $60M, though? I think they’d have to, from a PR standpoint. Hafner was a monster from 2004-2006, and has an intensity currently lacking on the Sheasters. For the Indians, it would be a shrewd salary dump; for the Mets, a much-needed change for the sake of change.

Back Mets Game 47: Win Over Rockies
Next Mets Game 48: Loss to Rockies