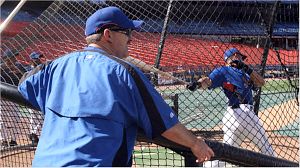 “Howard and I are always talking,” Church said. “He’s a great sounding board.”

Johnson has Church hitting from a more upright stance instead of the crouch he was in while playing with the Washington Nationals.

“He’s able to stay on top of the ball,” Johnson said. “He’s been much more consistent with his mechanics.”

As you probably know, David Wright also is a firm supporter of Johnson — referring to him as his “baseball father”.

Take a look at the two top hitters on Mets right now in these categories: AVG, HR, RBI, OBP, and SLG. Go ahead, I’ll wait …

Did you see Church’s and Wright’s name? Interesting, huh? It could be a coincidence though, that the two guys who publicly admit to listening to the batting coach, happen to be the team’s best hitters.

Yes, David Wright is not having a year like he did in 2007 (yet), but he’s been fairly consistent — his average has been .270 or higher since April 12th. And remember he had a slow start last year. If he sticks to his approach, he’ll come around.

Ah — “approach” — that’s where the batting coach can come in handy, providing tips and advice.

In a few cases, a batting coach can tweak a batter’s stance and see improvement — as Johnson did with Church. But once a batter gets to MLB, his mechanics are unlikely to change drastically. Think about it: after 10, 15, or 20 years of swinging, a guy’s swing “is what it is”. One of the few things a batter can adjust — immediately — is his approach, or the plan he takes when he steps into the batter’s box. For example, a batter can decide beforehand that he’s going to look for a breaking pitch and go the opposite way with it; or make the pitcher throw him a strike before taking a swing; or sit dead-red on a first-pitch fastball; or focus on a specific location in the strike zone. There are many other examples, these are just a few. But to be a consistent hitter, one needs to understand his strengths and weaknesses, take into consideration the weapons of a particular pitcher as well as the current game situation (i.e., the score, the inning), and figure out an intelligent approach for the at-bat. What will the batter do on the first pitch? What will he do if he gets ahead 2-0? What if he falls behind 0-2? What if the pitcher starts with a curveball? What if he throws all offspeed pitches? What if the runner has a chance to steal second?

Bottom line is this: the majority of the Mets hitters appear to be clueless when they’re standing in the batter’s box. It’s like everyone is on his own agenda, guessing what the pitcher is throwing, or trying to pull every pitch into the seats. The game situation is irrelevant, the score is irrelevant, the man on the mound is irrelevant. One out, nobody on, 7th inning, down by three? Oh, heck, I’m going to do the same thing I did in the first inning, when it was 0-0 — I’ll hack away at the first pitch, see if I can get it into the seats. Brilliant! Recently promoted pitcher who’s wet behind the ears, scared out of his mind, who I’ve never seen before? Heck, I’ll hack away at the first pitch — who cares if I’ve never seen his release point, or seen the movement on his ball before? Middle reliever who throws 90% sliders off the edge of the plate? I’ll gear up for a fastball inside and jerk it over the fence (but instead look like an idiot waving at balls outside and in the dirt).

Willie Randolph’s postgame comments often include the words “you’ve gotta tip your cap”, or “their guy shut us down”. Nice, respectful fodder for the beat writers, but the truth is, the Mets beat themselves every game, because they don’t put any thought into their at-bats. Maybe it’s time a few of the .260, .250, and worse hitter start listening to the guy who the .280 and .300 hitters are listening to. Whatever the slumpers are doing currently, certainly isn’t working, so what is there to lose?

Back Comeback Frequency
Next Mets Game 50: Win Over Marlins