Delgado is a Rattlesnake 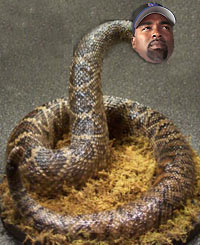 Rattlesnakes are venomous, and thus some people refer to them as “poisonous”. Similarly, Carlos Delgado is poisonous, in the way he approaches and executes his job. Poisonous because as the de facto veteran “leader” of the club, other Mets look to him as an example and might consider emulating his style.

For example, in the bottom of the fifth of last night’s game, there was a popup hit into foul territory on the first-base side by Aaron Rowand with two outs and men on base. Brian Schneider ran a good 100 feet in a hustling effort, but missed the ball by about two feet as the wind blew it just out of his reach. Watching the entire play, and taking digital photographs, was Carlos Delgado, who had a fine view and thanks to the zoom lens was able to get nice, clear shots of the effort. Earlier in the game, we watched Delgado make a half-hearted effort at a ground ball that skipped past him and Luis Castillo and into right field, with neither player making a diving effort.

This was not the first time we’ve seen Delgado make half-assed efforts at baseballs. Rather, this is his usual approach to balls that come off the bat. Sometimes it looks like he’s making a valiant attempt to AVOID batted balls.

I didn’t expect Delgado to get the ground ball, nor the popup. But, my feeling is this: if you are making SIXTEEN MILLION DOLLARS to play baseball, you best be a.) sweating; b.) breathing heavy; and c.) getting dirty. These three elements really need to occur when you are supposed to be, but not delivering as, a cleanup hitter and major offensive threat.

Here’s the thing. I know that age has robbed Carlos Delgado of his most valuable skills. However, that doesn’t mean he should be sleepwalking his way to his paycheck. If you can no longer do one thing well because your age makes it out of your control — then you must at the very least make a full effort with the actions that are in your control. This is called “earning your salary”. Delgado is good at scooping balls in the dirt, and good at occasionally hitting a pitcher’s mistake — sometimes over the wall, sometimes for a single. Every other aspect of his game is awful. His awfulness would be mildly acceptable if he hustled, dove for balls, and looked like he was trying. But he doesn’t — he looks like a lazy bum who doesn’t want the ball hit to him.

Right here is where I bring up Ron “Rocky” Swoboda, a fan favorite from the late 1960s and early 70s. For those of you too young to have seen him, Swoboda was a terrible fielder. He played the outfield — or rather, the outfield played him. Every fly ball was an adventure, and ground balls were far from routine. But, he hustled after every ball hit his way, regularly dove for balls, and thought nothing of smashing into walls. He’s most famous for a reckless, full-extension, diving backhand stab of a line drive in the 1969 World Series (this was known in NYC as “The Catch” after Willie Mays went west and before Endy Chavez robbed Scott Rolen). Bottom line: he was far from the most talented player on the field, but he was almost always the smelliest and the dirtiest. In other words, he earned his paycheck — which was probably around $40,000. Nice pay for an average Joe back then, but even with inflation it’s a far, far cry from the eight-figure salary collected by Delgado.

These days, Delgado is a very old 35. He labors around the bases, can’t bend down on ground balls, and has cinderblocks for feet. It takes three base hits to score him from first. In the past few years, his OBP has dropped 100 points, his slugging percentage slid double that. He always struck out at a high rate, but in the past at least he took walks. Now, walks are rare, in part because pitchers would be silly not to throw him strikes, and mostly because he rarely sees more than three pitches in an at-bat. His forte is his ability to hit homeruns, but he only hits one every 28 times to the plate (that comes out to around 17 in a 500 at-bat season). He’s also supposed to be an “RBI guy”, but he has driven in a total of only 18 runners (besides himself) in 55 games. That is AWFUL. You want to know how awful? Let me throw this at you: Delgado has driven in those 18 runners, out of 163 “ducks on the pond”. That’s right — Delgado has seen 163 runners on base when he’s come to bat, and driven in only 18 of them. That’s a rate of about 11 percent. To put that into perspective, consider that David Wright and Ryan Church are around 18%, Carlos Beltran is at 17%, and Luis Castillo is at 14%. (Most MLB hitters are somewhere around 15-20%, with the true run producers closer to 20).

Carlos Delgado is a wonderful human being, a truly nice guy with a big heart, and he has an extremely impressive resume. However, his once-amazing skills have diminished greatly, and he plays the game like a tired senior citizen on a lazy Sunday afternoon. Even if he starts to hit for power with some regularity, it won’t be enough to make up for his other shortcomings. Most importantly, he is the acting leader but doesn’t provide an especially inspirational example. A leader should have an insatiable hunger to get to the baseball while on defense, and a relentless need to beat the ball to the bag on offense. Every time Delgado pulls up and jogs down the line on a routine grounder, or waves his mitt at a passing grounder, he’s sending a signal to everyone else on the team: “No need to sweat, no need to dirty the uniform — save your energy. Hustling and diving are not important to winning.”

And THAT message is poisonous to everyone else on the field and in the dugout.