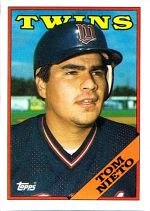 It was a long time coming, but the Mets finally came to their senses and fired the man who has been the biggest roadblock to their success: Tom Nieto.

The fact Nieto wasn’t let go after last season was unconscionable. Everyone and his brother knew that Nieto was the sole reason for the Mets’ “collapse” at the end of the 2007 campaign. His atrocious management of the bullpen catchers made it very difficult for relief pitchers to play cards in the bullpen, and there were times he outwardly refused to purchase hot dogs for Aaron Sele (I got this from a very reliable source “close to the team’s thinking”). In fact, his attitude was so deplorable that one time, while Nieto was sitting on the railing adjacent to the Shea scoreboard, Carlos Beltran purposely hit a homerun off his head. To get Beltran fired up, you really have to be despicable.

Remarkably, rather than eliminate the problem, Mets management chose to hide it, PROMOTING Nieto to first-base coach. Anyone with a tiny bit of baseball knowledge immediately saw Nieto’s grave flaws standing in the coach’s box. His inability to get batters to reach the first-base bag during the San Diego series glaringly exposed his weakness in his new role, and his helmet was at least one size too small. Apparently, that was the last straw for the Mets’ front office. Many inside the organization feel that Willie Randolph’s refusal to assign someone else as the first base coach was the main reason for his own dismissal.

Good luck and good riddance, Mr. Nieto. May you poison some other baseball organization with your disconsolate coaching skills.