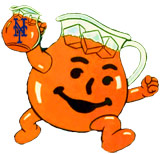 Two nights ago, the SNY broadcast team (again) went on and on and on about Jerry Manuel, and how he’s already made drastic changes with this ballclub. For example, when Carlos Beltran stole third down by five and then charged home on a wild pitch, Keith Hernandez lauded the moves, and pointed out that Manuel said his team would be much more aggressive. Huh. Had Beltran done that two weeks ago I’d bet my house that Keith would criticize the move.

And by the way, the Mets were already pretty darn aggressive on the bases. They led all of MLB in stolen bases last year, with 200 — a good 56 more than the second-place club. And the Mets were either first or second in MLB for most of this year, prior to Randolph’s dismissal.

The Beltran conversation segued to a conversation that Manuel had with Beltran, in which he asked him to be more aggressive on the basepaths and steal more bases, and “forget about his basestealing percentage”. WOW!!! What a fantastic idea!!! What a revelation! Why didn’t Willie think of that, and ask Beltran to do just that?

Oh, that’s right — HE DID! On SEVERAL occasions over the past three years. In fact, the team even brought in a designated basestealing coach, Rickey Henderson, who tried (unsuccessfully) to drill home the same message to the stubborn Beltran. Hmm, is it possible Beltran wasn’t going to listen to anything Willie said because his countryman Tony Bernazard was constantly whispering in his ear, telling him all the terrible things Randolph thought of him?

Later in the game, the SNY camera cuts to Jerry Manuel and Jose Reyes talking. The quip by Keith Hernandez: “communication is always good”. As if to say that Reyes and Randolph never had communication? I’m beginning to buy into Randolph’s SNY paranoia.

In last night’s game, the “love” for Manuel would have continued, had it not been for the 10-nothing drubbing. Keith Hernandez forced it a bit, saying he “liked” Jerry Manuel and Carlos Beltran getting thrown out of the game, because he “… hadn’t seen this in three years.” Whether he was talking about the ejections, or the emotions, it matters not — because Willie Randolph was ejected a few times in his tenure, and emotions erupted as recently as Game 161 last year against the Marlins. On that day, and the day after, the same Keith Hernandez criticized the Mets for showing too much emotion, and “giving the Marlins motivation”. Huh.

Maybe there was an edict sent down by the head honchos, telling SNY to focus on the positive. In any case, the power of positive thinking ain’t working — the Mets are 3-4 since “great baseball mind” Manuel took over.

Interestingly, Ron Darling backtracked in the postgame last night, saying that it would take “30 days” before implemented changes are “noticeable”. Huh. And yet, Darling has been quick to point out — on air — a multitude of changes in the last week. Perhaps things look differently in the booth than they do in the SNY studio?

Ironically, Kool-Aid is artificially flavored. Just like this outpouring of effusive praise for Jerry Manuel.

Back Mets Game 76: Loss to Mariners
Next Big Changes On the Way