Bayonne Bullet on the Block 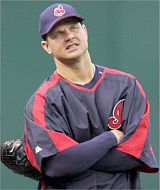 The Cleveland Indians have DFA’d Joe Borowski, a.k.a. the “Bayonne Bullet”. He’s also known as the 2007 AL saves leader.

This season, however, Borowski has struggled mightily, with a 7.56 ERA in 18 games coming back from yet another arm injury — this time a right triceps strain. Borowski’s arm woes have plagued his career, and this most recent one has stolen a few more miles off his already not-so-fast fastball.

Unfortunately for the Bullet, he can’t afford to lose velocity. His sinker isn’t of the devastating sort, his breaking pitch is mediocre at best, and his change-up is not in the realm of Johan Santana’s — or Aaron Heilman’s, for that matter. Even at the top of his game, Borowski is far from dominating, and doesn’t trick anyone. The guy simply throws strikes, gives everything he has, and hopes for the best.

Borowski’s release is only the beginning for the Indians, who are on the verge of mailing in the 2008 season and looking at building for next year. Expect them to shop free-agent-to-be C.C. Sabathia heavily, as well as veterans such as Casey Blake, Jamey Carroll, David Dellucci, Paul Byrd, and possibly Rafael Betancourt. Salivate all you want over Sabathia — unfortunately the only guy the Mets might have a shot at getting from that group is Carroll. Ho hum.

Should the Mets give Borowski a flyer? Why the heck not? Since they have absolutely nothing in the way of trading chips, it behooves them to pick up anyone with previous MLB success. Take a look at the AAA roster in New Orleans, and tell me there’s someone head and shoulders above Borowski in the Zephyrs’ bullpen. We already have discovered the Carlos Muniz is not ready for prime time — though I’m willing to continue to give him chances — and after Muniz there’s not much. Unless the likes of Jose Santiago and Nate Field get you excited.

Pick up the Bullet, put him in NOLA, and hope for the best. Who knows, maybe he just needs a little more time off, or a change in arm angle, or a move to the other side of the rubber. Borowski — ever the survivor — has reinvented himself before, so why not roll the dice on the guy with the big heart?

Back Preview: Mets vs. Phillies
Next Mets Game 86: Loss to Phillies