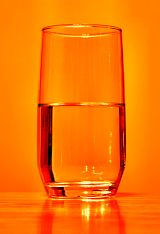 Will the Mets continue their roll and start out the second half with a bang? Or will the momentum be broken and they return to their .500 ways?

There are two ways to look at the last 95 games, and the next 67: with the glass half-full, or half-empty.

Let’s look at the second half from both perspectives.

– Johan Santana has a sparkling ERA, and is famous for strong second halves. Oliver Perez has found himself and Mike Pelfrey has turned the corner; both look like aces. John Maine is bound to pitch better and Pedro Martinez is the #5. The Mets have the best starting rotation in MLB, and those horses will carry them to the postseason.

– In contrast, the awful starting rotation of the Phillies has finally caused that team to falter. With no help in sight, the Phils will continue to sink in the standings.

– Backing up the Mets’ spectacular starting rotation is a bona fide bullpen. Now that Aaron Heilman has been “fixed”, all of the Mets relievers are pitching well. Good pitching beats good hitting.

– Carlos Delgado is back. With his dangerous bat, the Mets lineup is suddenly fearsome, especially once Ryan Church returns.

– Jose Reyes and David Wright have been on fire for the last month and a half. Both are poised to make MVP runs in the second half — with a warming Carlos Beltran ready to contend as well.

– What is up with Maine? Can Pedro stay healthy? How long before Perez is replaced by Mr. Hyde? Can Pelfrey keep it up? Under the surface, this starting staff is more questionable than people think.

– The Phillies’ pitching was even worse last year, and they won the division.

– Will the Mets bullpen be worn out by late August, and thus repeat the breakdown of last season? How many more saves is Billy Wagner going to blow? And do the Mets really have a setup man?

– Is Delgado really back, or really lucky? Many of his hits have come off awful pitchers, and in laugher games. His bat speed is still slow, so he may just be guessing right lately. And Church’s return could be more a matter of “if” rather than “when”.

– Reyes had a similarly strong first half last year, then messed the bed in the last two months of the season, when the Mets needed him most. We can probably count on Wright to continue his pace, but his MVP-like performance last year wasn’t enough to carry the team. Can Beltran be a cleanup hitter with a .260 average?

Back Alou Out – Now What?
Next Hear Me On NY Baseball Digest