Who (the Heck) is Brandon Knight? 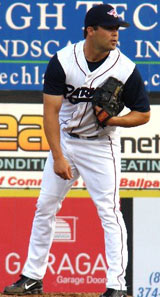 With Pedro Martinez out of the country after the passing of his father, the Mets have replaced him on the roster and in the rotation with Brandon Knight.

Naturally, everyone is wondering who IS this “Knight” and is he arriving on a white horse? In shining armor?

Truth is, he’s not that kind of Knight, but he does bring a great story.

Knight is a 33-year-old righthander (bats left) who has been in the minors since age 19, earning only two very brief cups of coffee with the Yanks in ’01 and ’02. He was drafted out of Ventura College (a junior college / 2-year school), where he is their all-time leader in complete games (17), victories (18), and is 12th in batting average (.350). Ventura produced several other MLBers through the years, including Roger Erickson, Brook Jacoby, Noah Lowry, Robert Fick, and former Met Darren Reed. In fact, when Knight takes the mound on Saturday night, he will be only the second player to ever wear the uniforms of the Ventura Pirates, the New York Yankees, and the New York Mets — whatever that’s worth.

Knight was a so-so prospect with the Rangers when he was traded with another minor leaguer in 1999 to the Yankees for Chad Curtis. Knight continued to be OK, not great, taking his turn every fifth day for the Columbus Clippers in 2000 and 2001, establishing himself as an innings-eater (he completed 8 games in ’00). It was enough to earn a spot as mopup man in the Yankee bullpen for extremely brief periods in ’01 and ’02, and he did not make the most of the scan opportunities. In 11 MLB games, he posted a 10.71 ERA.

Knight pitched in Japan from 2003-2005, before returning to the Pirates organization and pitching in 51 games as a reliever for Altoona (AA) in 2006. However, he was released after the season and seriously considered retirement. His “last chance” was to hook on with a team in Mexico, but it fell through and he had all but decided to quit and try his hand at coaching when former teammate Brett Jodie, the pitching coach for the Somerset Patriots, asked him to give it one more try in the independent league. Knight’s wife encouraged him to head to NJ, assuring him that she and their two kids would do OK for a while on their savings.

In 2007, Knight had a strong season — as did batterymate Robinson Cancel — but did not receive any professional offers. He returned to the Patriots in 2008, and after leading the league in strikeouts with 50 after his first six games, was signed by the Mets in May and assigned to New Orleans. He’s gone 5-1 with 49 strikeouts in 39 innings for the Zephyrs, and last week was named to the US Olympic Team. All ready to report to Team USA, the Mets changed their minds about letting him go and instead are sending him to the mound at Shea for his first big-league start against the Cardinals.

Already a great story, it can get a little bit better with a win tonight.