Can Fernando Keep It Up?

“He right now is our leftfielder,” Manuel said. “There is no question about it.”

I’m not sure whether to take that as a good sign or the kiss of death. 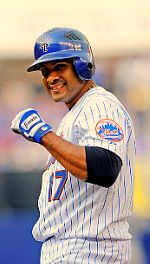 Pardon my pessimism, but I do have this slight fear that the “official announcement” of Tatis’ status is somehow bad luck. Part of being a Mets fan, I guess … too many Armando Benitez experiences can do that to a person.

Seriously though, can we expect Fernandomania to continue? Tatis is hitting .322, mainly due to his .415 July. Will he keep up that pace?

Of course not. Tatis has been phenomenal in recent weeks, and I absolutely love watching him play because of his constant hustle and hungry approach to the game. But he won’t continue to hit in excess of .400 through September — he’s not Ted Williams.

The question is, then, when he cools off, how will he cool? Will he cool down to be a .300 hitter? A .280 hitter? If so, that’s fine, especially if he continues to drive in runs and hit with some pop. What concerns me is that he might get as cold as he has been hot, and regress to the .252 he was before July. Again, not a big deal, as long as Ryan Church returns AND hits as well as he did in April and May. Which brings us to other questions:

1. Can Church return 100% from his neurological issues, or will they affect his play?

2. Can Church “shake off the rust” and pick right up where he left off before going on the DL?

3. Is the April-May performance we saw the “real” Ryan Church, or was he hitting above his head?

Naturally, I am rooting for both Tatis and Church to continue on their respective rampages. But at the same time, the logical side of me says that it behooves the Mets to find a legitimate bat to put into the outfield, “just in case”.

Back Heilman a Starter?
Next Mets Game 107: Win Over Marlins