Day in the Life of Brian Cashman 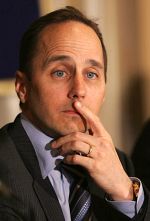 Yankees GM Brian Cashman sits quietly at his desk, a few days after stealing Xavier Nady and Damaso Marte from the Pirates for a slew of prospects who were never going to get a shot to play in the Bronx.

Suddenly, a knock on the door.

Cashman looks up from the morning paper, eyeing Girardi suspiciously. “Joe, I just got you a player — two in fact.”

Girardi: “Yeah, I realize that, and I appreciate your efforts. But, uh … aw heck, just take a look at this.”

Cashman: “Joe, I’m in the middle of a crossword puzzle here …”

Cashman, visibly annoyed, places his reading glasses on the tip of his nose and picks up the card again. “Oh, yes, I see what you mean … after Nady, we have no future Hall of Famer, no previous MVP, not even a lousy All-Star!”

Cashman: “Where is Georgie?”

Girardi: “Injured. For the year. We just got word today.”

Cashman: “Ah, that’s a problem. Tell me, what would you prefer?”

Girardi: “Well, I don’t mean to sound disingenuous — I do appreciate you getting Nady — but another Hall of Famer would be nice. Kind of balance out the bottom of the lineup.”

Cashman snaps his fingers in approval. “You got it, Joe.” He picks up the phone. “Dave? Hey, Cash here. Say Dave, we need a catcher, is Rodriguez available? Uh-huh,” Cashman covers the mouthpiece, gives the thumbs up to Girardi and whispers, “yes”. “Yeah, right Dave. No, well, we were thinking … I don’t know … it might be cute, you know, A-Rod and I-Rod …. yeah. Hughes? No way Dave, how about Hawkins? I can kiss what? OK, OK, calm down, I was kidding,” Cashman winks at Girardi. “Well what about Farnsworth? He’s handled Detroit well before … he throws 96-97, and now with the glasses …. yeah? Really? OK then, it’s a deal.” Cashman slams down the phone.

“OK Joe, anything else?”

Girardi: “Well, you mentioned Hawkins … you know, he’s still kinda hanging around the clubhouse … sort of makes me feel guilty, you know?”

Cashman: “Right, right. Well, in a few days we can release him outright. This DFA thing can be a pain …”

Cashman reads the sadness in Girardi’s face. “Aw heck, let me make another call … I know just the guy.” Cashman picks up the phone again. “Ed? Cash here. Yeah, been a while. Say, that team of yours looks like it’s on the cusp of something there. Yeah. Oh, of course I saw that … Wolf, yeah … brilliant, Ed, brilliant. You’re going to surprise everyone I’m sure. Just like ’04. Yeah. Listen, we go back a long time, let me ask you, can I help you out with anything? Bullpen? Yeah, well, everyone’s looking for relievers Ed. Mmm hmm … well …. Hawkins? Well, I don’t know … he’s an important cog for us … you’ll give us who? Does he have a pulse? Er, I meant plus, plus — does he have a plus? Plus makeup you say … 285 in the Sally league … well, we already have Robby at second, but what the hey. Tell you what, consider it a favor from the New York Yankees. Yeah Ed, I’ll see you in October … yeah, I’ll have him pack his bags today.” Hangs up the phone.

Cashman: “Great. Hey, before you go … what’s a five-letter word for ‘thievery’?”

Back Mets Game 108: Loss to Marlins
Next Seeing Through the Smoke Screens