Again, Why Not Niese 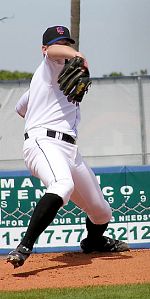 Mets fans are up in arms with the idea that Brian Stokes, rather than Jonathan Niese, will be spot starting this Saturday against the Florida Marlins. After all, isn’t Niese the best pitching prospect in the organization? Isn’t he so fantabulous that he was deemed an “untouchable”? Isn’t it true that the Mets’ refusal to part with Niese is the reason Manny Ramirez, Jason Bay, nor Ken Griffey are playing left field at Shea this weekend?

So why not Niese?

Mainly because this is a “spot start”. Meaning, whoever is chosen to start on Saturday will be sent right back down to the minors after the game. That means, even if Niese were to come up and pitch a no-hitter, he’d still be on his way back to JFK, taking the first flight back to New Orleans.

Therefore, if the Mets bring up Niese, they’ll burn up one of his options by sending him back down. If I understand the option rule correctly, the Mets would be better off waiting until later in the season — i.e., September — to call up Niese, because once the rosters expand to 40, there will be no reason to “option” him back down. That means they can save the option for 2009, and still have options in 2010 and 2011. Remember the kid is only 21 years old, and there’s no guarantee he’ll make the team next year — so again, the options become valuable.

Now, there is a possibility that the starter on Saturday is impressive enough to stay on the team. But, it would not be as a starter, but rather as a long reliever. The Mets do not want Jon Niese hanging around in the bullpen waiting for a blowout — they want him taking the ball every fifth day. So it make sense to bring Stokes, who was a reliever until this year.

There is another, fairly remote reason the Mets aren’t bringing up Niese for the start. If by chance the Mets decide they want to make a trade in the next few weeks, anyone they want to deal away who is on the 40-man roster would have to first pass through waivers. Minor leaguers not on the 40-man — such as Niese — do not have to go through the process. However, if Niese is added to the 40-man, and the Mets wanted to trade him, he would have to first be waived (and he wouldn’t make it through). I doubt very very highly that the Mets are shopping Niese, but by keeping him down, they retain flexibility.

Finally, there is this: Saturday’s game is extremely important. The Mets and Marlins are fighting for first place, there will be a huge, loud crowd, and the Fish can flat-out rake. Last year, the Mets hid Philip Humber in the bullpen (until it was too late) because they didn’t think he was emotionally ready to handle the pressure of a big game in New York City in the middle of a pennant race. Similarly, the Mets would prefer to give Niese a start against, say, the Nationals, to get his feet wet.

So no Jon Niese this weekend. You’ll have to get your “fix” by viewing pictures of Jonathan Niese from spring training.

Back Mets Game 114: Win Over Padres
Next NL East Discussion